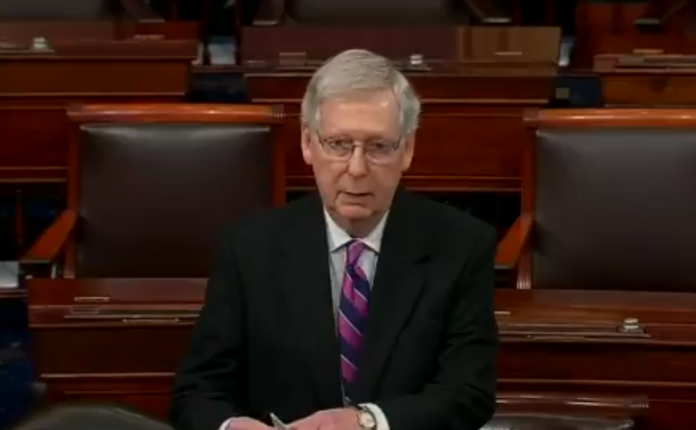 Senate Majority Leader Mitch McConnell (R-KY) said Tuesday on the floor of the U.S. Senate that Democrats are to blame for the election fraud scandal in North Carolina which has led to a new election being called for the contested 9th Congressional District House seat.

McConnell began his remarks by trying to twist facts to suit his larger narrative:

“For years and years, every Republican who dared to call for commonsense safeguards for Americans’ ballots was demonized by Democrats and their allies. We were hit with left-wing talking points insisting that voter fraud wasn’t real — never happens, they said.”

Next, McConnell made a shameless push for voter ID laws:

“Modest efforts to ensure that voters who are who they say they are and are voting in the proper place were really some sinister right-wing plot to prevent people from voting,” McConnell said. “So now, as you might expect, now that an incident of very real voter fraud has become national news and the Republican candidate seems to have benefited, these long-standing Democratic talking points have been really quiet. Haven’t heard much lately from the Democrats about how fraud never happens, they’ve gone silent. Now some are singing a different tune.”

That led to the erroneous conclusion by the majority leader that restricting the right to vote is more necessary now than ever:

“Now there is a new interest in ensuring the sanctity of American elections. I’ve been focused for decades on protecting the integrity of elections, so I’d like to welcome my friends on the left to their new realization. They’ve just discovered in this subject really matters. but I’ve yet to see any evidence they’re actually interested in cleaning up the conditions that leads to messes like this one in North Carolina.”

Here’s a better suggestion for Senator McConnell to consider: Since it’s been clearly established in North Carolina that Republicans are the ones who try to steal elections, how about we make it more difficult for them to vote? Or, even better, why not block Republicans in North Carolina from voting for a few years to teach them a lesson?

Memo to Mitch: Your deeply flawed logic is a double-edged sword. Careful where you wield that thing.