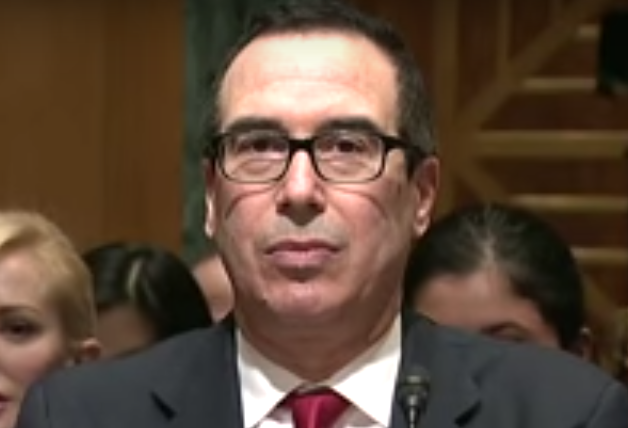 As House Ways and Means committee chairman Richard Neal (D-Mass.) prepares to request President Donald Trump’s tax returns in a letter to Treasury Secretary Steve Mnuchin, Mnuchin admitted to Congress on Thursday that he will “comply with the law” but somehow also protect Trump at the same time.

Trump repeatedly promised to release his tax returns during the 2016 Election, but excused not doing so by claiming they were under audit by the IRS. Once Trump won the election, he refused to release them and has continued refusing to do so ever since, resulting in accusations that he is hiding something.

And that something could be insurance fraud and tax evasion, which Rep. Alexandria Ocasio-Cortez (D-N.Y.) learned from Michael Cohen last month in a line of questioning that made the case for obtaining the tax returns as evidence.

Even Senator Chuck Grassley (R-Iowa) wants to see the tax returns if Democrats obtain them. However, he’s not willing to seek them from the Treasury himself.

Before making a request, the House Ways and Means Committee grilled Mnuchin this week to gauge how he will respond to it.

“I will consult with the legal department within Treasury, and I will comply with the law,” he said in response to a question from Rep. Lloyd Doggett (D-Texas), who asked point blank if Mnuchin would release the returns.

“If you have a request for me today, I will accept it,” Mnuchin went on to say. “I can’t speculate on a request until I see it. We will examine it and follow the law.”

In a contentious back-and-forth, Treasury Sec. Steve Mnuchin says, “If I receive a request” to release Pres. Trump’s tax returns, “I will consult with the legal department within Treasury, and I will follow the law.” https://t.co/PORRNBBrwO pic.twitter.com/TRT2FoqF2i

The problem for Mnuchin and Trump is that the law says that Congress can ask for Trump’s tax returns.

House Democrats have been preparing to ask the Internal Revenue Service for Trump’s tax returns under an obscure provision that gives the leaders of the House and Senate tax-writing committees the power to request taxpayer information from the Treasury Department.

It states that “the secretary shall furnish such committee with any return or return information specified in such request.”

Mnuchin would go on to claim that the Treasury Department “will protect the president as we would protect any individual taxpayer under their rights.”

Yeah, that’s probably not true. The fact is that Mnuchin is a Trump stooge and if Congress wanted to see a tax return from Hillary Clinton or another high profile Democrat he would likely release them without delay or concern.

Mnuchin will likely refuse to hand Trump’s over, which will result in a subpoena that Trump will challenge all the way up to the Supreme Court. If the conservatives on the court really care about the law, they will deny Trump’s appeal. But if they are partisan hacks who only care about protecting Trump, they’ll thwart the law.

But Trump could end up being forced to release his returns anyway if states continue to pass laws requiring candidates to do so if they want to appear on the ballot, something New Jersey is working on right now.

The American people have the right to know what Trump is hiding in his tax returns. Transparency is crucial, and the only reason why Trump wouldn’t want them released is because they will prove he’s a criminal. If he truly has nothing to hide, he should release them immediately. If not, the demands will only get louder.