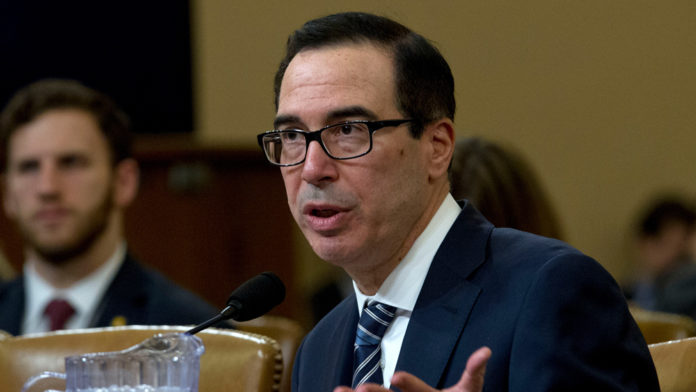 With President Donald Trump’s trade war continuing to wreak havoc on the U.S. economy, the White House is sending out spokespeople to try and convince everyone that things are just fine and will continue to be great as long as Trump is in office.

On Monday, that job fell to Treasury Secretary Steven Mnuchin, who told reporters:

Part of what Mnuchin said is correct: The economies of China and Europe are both slowing. But so is the U.S., which produced a pathetic 130,000 new jobs in August. 25,000 of those were temporary positions assisting with the upcoming 2020 census.

But even if we take what Mnuchin said as fact, seconds later he undercut his message by signaling that the administration wants to try yet another tax cut next year, even though the 2017 tax scam bill has only succeeded in lowering refunds for most taxpayers and ballooning the federal debt and deficit to obscene levels.

Specifically, Mnuchin responded to a question regarding comments National Economic Council Director Larry Kudlow made while appearing on Fox News that there would be another tax cut bill from the White House. The Treasury Secretary remarked:

“And regards to a middle class tax cut, you know, we’ll be looking at tax cuts 2.0, something that will be something we’ll consider next year. But right now, the economy is in very, very good shape.”

According to the Hill, here’s what “tax cuts 2.0” would look like, based on what Kudlow said on Fox:

A new tax-cut package could be rolled out before the 2020 election and could include elements such as lower individual tax rates, lower capital gains rates, changes for businesses other than corporations and relief for residents of high-tax states.

So the economy is doing great, but another tax cut is needed to stimulate it even though the government is hemorrhaging red ink already. And why would the White House even pitch such a plan when they know it has absolutely no chance of passing the House?

With each statement and action that comes out of this White House, it appears that they’re terrified of what may happen to them when voters render their judgement on the Trump presidency in 2020.