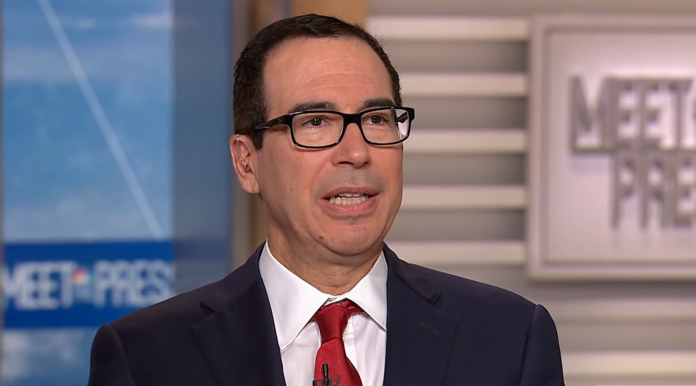 Treasury Secretary Steve Mnuchin admitted Sunday that the White House does indeed have a transcript of President Donald Trump’s phone call with Ukrainian President Volodymyr Zelensky, but noted that the administration has no plans to turn it over to Congress.

During an appearance on “Meet the Press,” Mnuchin seemed to suggest that congressional committees have no right to perform their Constitutional oversight duties:

“What I have a problem with is Congress asking for a transcript between world leaders. I think that those are confidential discussions and that’s a difficult precedent.”

But if that transcript would reveal illegal or unethical behavior by President Trump, then Congress has every reason to want such documentation.

“He says he said nothing inappropriate, so why not release the transcript?”

Mnuchin’s response was just as ridiculous as most of the things his boss says:

The Treasury Secretary was also a guest on CNN Sunday, and got slapped down by host Jake Tapper when he tried to tell Tapper that former Vice President Joe Biden’s family should be investigated but the Trump family is off limits. Mnuchin remarked:

“What I do find inappropriate is the fact that Vice President Biden’s son did very significant business dealings in Ukraine. I, for one, find that to be concerning and to me that is the issue perhaps that should be further investigated.”

That led Tapper to retort:

“I don’t understand. So it is okay for Donald Trump Jr. and Eric Trump to do business all over the world and okay for Ivanka Trump to have international copyrights while President Trump is president and, while Joe Biden was vice president, his son shouldn’t be able to do business dealings?”

The hypocrisy of this administration and everyone who works in it is truly staggering. They apply one standard to Donald Trump and the Trump family, but want to hold everyone else to account. It’s little wonder that so many Americans are fed up with the lot of them.