The United States Blues
Home News Montana mom runs a three-hour marathon while pushing her children in a... 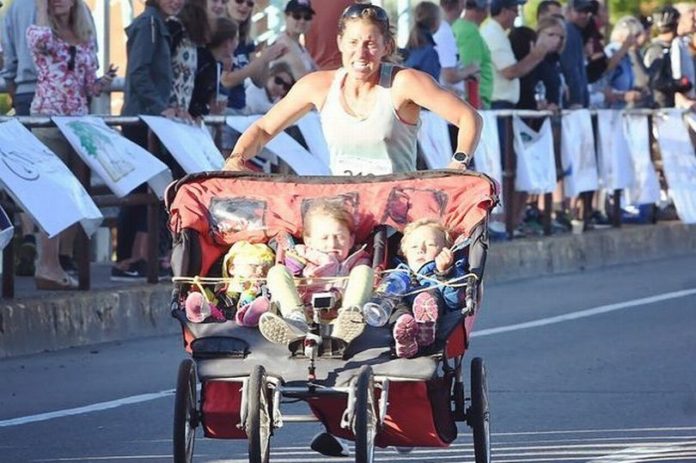 If you know anything about running a marathon, you certainly realize it isn’t for the fainthearted, and it requires you to be in good physical shape if you intend to finish the race.

Now imagine running a marathon while pushing a stroller containing three children, with the stroller and kids weighing a total of 185 pounds.

That’s exactly what Montana mom Cynthia Arnold did recently at the Missoula Half Marathon, according to Runner’s World:

“This wasn’t the first time we’ve seen the 35-year-old mother of three wield a trio of tykes across a race finish line. Last year, she broke the Guinness World Record for the fastest half-marathon while pushing a three-person stroller at the Missoula Half Marathon in Missoula, Montana.

“This year, she returned to the event to go for an even larger goal: to set the Guinness World Record for the fastest full marathon while pushing three kids at the Missoula Marathon.”

How far did Arnold run pushing those three children? Oh, just a mere 26.2 miles. And to break the world record, she had to complete the race in 4 hours, 6 seconds.

But this Super Mom managed the feat in 3 hours, 11 seconds.

“Kicking off her preparations with a trail marathon in February and a series 20-mile training runs. Most of these runs were done alone, but she did load up the stroller to take her kids occasionally. The stroller runs were usually limited to 10 miles, plus one 17-mile long run for a confidence booster.

“When she does run with her kids—ages six, four, and one—they enjoy it as much as she does, she told Runner’s World. That is, when they’re not napping.”

But when asked about her training and the record she achieved, Arnold made it sound like it’s no big deal:

“We live in rural Montana and see lots of wildlife on the bike path right out my door. I keep a pretty consistent routine and see some regular commuters each day, and the kids like saying hello to the cyclists.”

And in case you were wondering, Arnold said she definitely recommends running with your kids:

“Running with the stroller has so many benefits for running parents.Those of us who run know how much it is a part of our identity. You can’t just give that up if you become a parent. The stroller gives one the freedom to carry on a lifestyle with new ones in tow.”

Don’t feel bad if you get exhausted just thinking about it. That’s true for most of us.