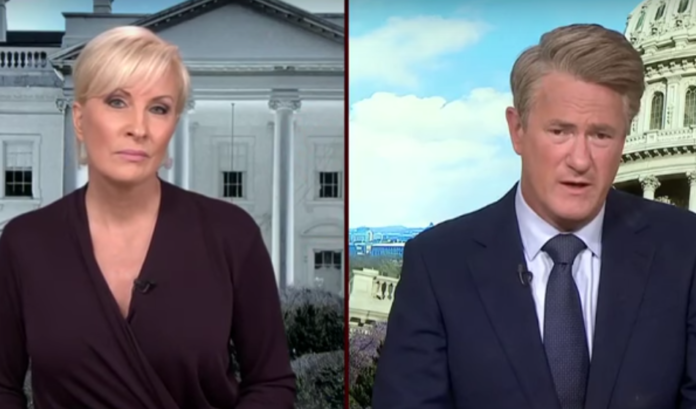 The speech is expected to be full of lies as Trump tries to scare the American people into supporting his wall as the government shutdown continues into its third week and is now the second-longest on record.

Trump made the request to networks on Monday and executives deliberated whether they would air it, eventually deciding to do so, much to the chagrin of millions of Americans who feel Trump is going to disgrace the office by repeating his many debunked lies in a desperation ploy to garner support for his draconian immigration policies.

Mika certainly opposes the decision of the networks, and she made a strong argument in her plea for them to change their minds on Monday morning.

“One of the most time-honored and powerful ways a president has to communicate with the American people is through a prime time Oval Office address,” she began. “The majesty of the setting. The request for valuable television time, network TV time, with the ability to capture the focus of the people of the United States to signal the country that this is something of national importance.”

“Done right, a nighttime Oval Office address can unite the country in trying times,” she continued. “It can inspire the better angels within ourselves, but all the signs here indicate that is not what Donald Trump has in mind and the networks have a decision to make. Do they want to run the promise of more lies, more misleading statistics, more twisting of reality, mindless confrontation all for the sake of defending this dark twisted fantasy of a wall on the Mexican border to fight an enemy that doesn’t exist except in the fevered swamps of American politics.”

Brzezinski went on to implore the main networks to reconsider airing Trump’s speech so that we can preserve the dignity and importance of Oval Office addresses to the nation.

Scarborough was just as critical, pointing out that the networks had previously turned down airing an immigration speech from former President Barack Obama in 2014, and called them out for being hypocrites because they know Trump is going to spend all his time lying.

He’ll say his wall will stop drugs from pouring over the border. That’s a lie that has been debunked. He’ll claim that thousands of terrorists are trying to cross the border. That’s a lie that even Fox News debunked. He’ll say that illegal immigration is a national emergency, but it’s not. He’ll claim illegal immigration will stop because of the wall, but it won’t because most migrants arrive by plane or ship. And he’s going to claim illegal immigrants cost our nation billions of dollars but the fact is they actually contribute hundreds of billions of dollars in tax dollars every year. Meanwhile, Trump’s shutdown is truly costing billions and so will his wall.

“He’s going to be telling nothing but lies and falsehoods, and he’s going to be twisting reality, just like he did — my god, at this point I’ve got to say how stupid are Americans who still believe there’s a crisis on the southern border?” Scarborough said, taking aim at Trump’s hardcore supporters.

“They played you for suckers, they played you for fools, and I know that makes you angry,” Scarborough continued. “You know they’re playing you for suckers and fools again, telling you there’s this crisis at the southern border when immigration has been pulling out instead of coming in. More Mexicans have been going home than coming back to the United States of America illegally. Did you know that? That’s been going on not for one year, not for two — that’s been going on for 10 years.”

“You can look at Donald Trump’s own statistics from Donald Trump’s own government,” he concluded. “He’ll tell you that’s been going on for a decade now. There is no crisis at the southern border, except for the humanitarian crisis that Donald Trump created himself, and if he wants to fix that crisis, he doesn’t need to come on TV and lie to you at night. All he needs to tell the Department of Homeland Security and the Justice Department to get the hell down to the border, take care of those kids, make sure they’re okay and do everything you can to get them reunited with their parents and sent home. That’s the only crisis we have here.”

The Morning Joe panel also observed that if the networks are scared of being called “fake news” for refusing to air his speech, they shouldn’t be because Trump already calls them “fake news.”

At the very least, the networks should fact-check Trump in real time and allow a Democrat to deliver a rebuttal. It’s time for the media to stand up to Trump and spare Americans from having to listen to his lies and rants on national television unchecked.