The United States Blues
Home Politics Congress Morning Joe destroys Mitch McConnell for failing to protect the US from... 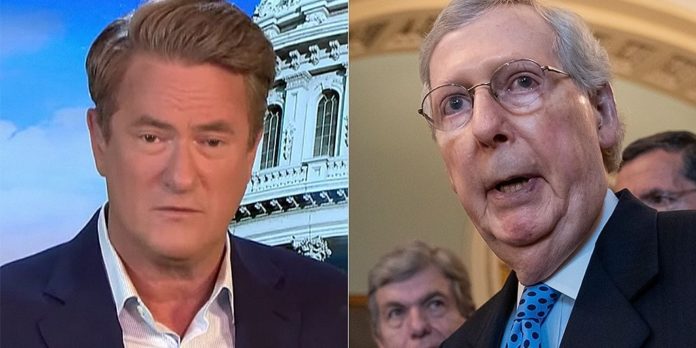 MSNBC host Joe Scarborough says he’s sick and tired of Senate Majority Leader Mitch McConnell (R-KY) and his inaction on legislation that would protect the United States from Russia or assault weapons.

Not long ago, Scarborough dubbed McConnell “Moscow Mitch” for his repeated failure to bring election security legislation to the floor of the Senate for a vote. And on Wednesday, Scarborough again pointed to McConnell’s apparent willingness to let Russia attack the 2020 election:

“You look at this guy’s legacy, and it’s going to be two things, I think right now. He’s going to have a legacy of basically doing the work of Vladimir Putin, an ex-KGB agent, and Mitch McConnell has been told by the CIA, director of national intelligence, the United States military, he has been told by everybody that Russia is trying to interfere and disrupt our democratic process, that we are under attack, so Mitch McConnell is killing Republican bills like Marco Rubio’s, and Democratic bills that would protect the homeland from this attack from Russia.”

“‘Moscow Mitch’ is doing nothing about it, but he’s killing every bill, including Marco Rubio’s bill that simply says if we catch somebody interfering with American democracy, we will put sanctions on them. ‘Moscow Mitch’ killed that bill, too. ‘Moscow Mitch’ has killed every single bill that the intel community has said will protect America, so that’s his legacy, not protecting us from enemies foreign.”

More recently, the host continued, McConnell has waffled on whether or not he would allow for debate or legislation on measures such as universal background checks for gun purchases or a ban on assault weapons:

“What about his legacy protecting us from domestic enemies, people that would shoot children, first graders, the Friday before they go home for Christmas holiday with AR-15s, or people that would shoot wildly from their car in Odessa, Texas, and shoot 17-month-old babies in the back seat of their cars or would shoot up people going to worship Jesus in Texas churches that do nothing about it, or shoot up people going to Walmart for back-to-school shopping?”

All of it, Scarborough concluded, leaves him wondering exactly how McConnell will be remembered when the history books are written:

“But Mitch McConnell, just like ‘Moscow Mitch,’ won’t do anything in protecting us from foreign enemies, he has been the one person that has killed every one of these bills to protect us from our domestic enemies, that are gunning down our children every day.

“What’s his end game? What’s his legacy? Where does it end? Who supports ‘Moscow Mitch’?”