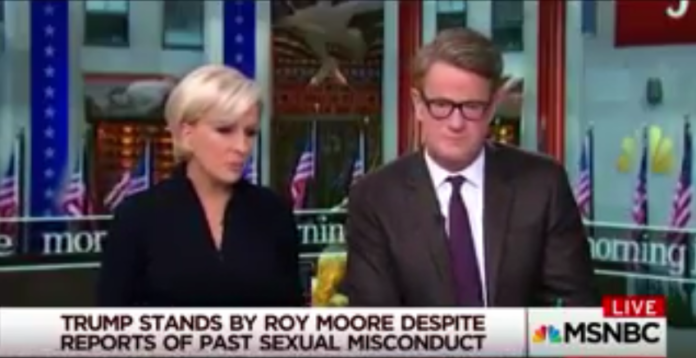 Donald Trump’s endorsement and defense of Roy Moore was HUGE mistake judging by the reaction of Morning Joe.

Just before heading off to Mar-a-Lago for the Thanksgiving holiday, Trump defended Moore and made it clear that he thinks electing a pedophile is better than electing a Democrat.

As a result, Trump has been taking a beating ever since, and rightfully so.

After all, child molestation and sexual assault should never be tolerated, even if it means losing political power.

The hosts of Morning Joe were especially disgusted by Trump’s remarks. So disgusted, in fact, that they agreed that if Moore wins the Republican Party will have become the “party of pedophiles.”

“So if your moral code doesn’t dictate that you come out strongly against someone who’s been accused of these things, maybe a political, strategic argument would prevail on the president. Which is that: you win this seat, this Senate seat for Roy Moore, it’s a Pyrrhic victory, because you will be saddled — as you all have just said — as the party of a pedophile for the rest of Roy Moore’s term. And by the way, the president will be saddled with that…you stood up in this moment of truth, you stood up and took the side of an accused pedophile.”

Joe Scarbrough chimed in by stating that he has faith that Alabama voters will do the right thing and reject Moore on Election Day in December because this isn’t the Alabama of the 1970s and that Alabama voters are more educated now. He also cited the recent Democratic victories in Virginia where women and young people flocked to the ballot box, which is unusual in a non-presidential election.

John Heilemann added that if Scarborough is right, Republicans will be hit by a “double whammy” in that they’ll lose a Senate seat and be known as the “party of pedophiles.”

The Republican Party used to preach about morality, and they still do so even though they have become total hypocrites. A child molester should not be allowed to become a Senator for the sake of defeating the Democrat, or at all for that matter. But the GOP did pick Trump as their candidate so they apparently will do anything to get and keep power. And they will regret it.

Because in the end, Morning Joe is right. A majority of Americans are unlikely to vote for the “party of pedophiles.”