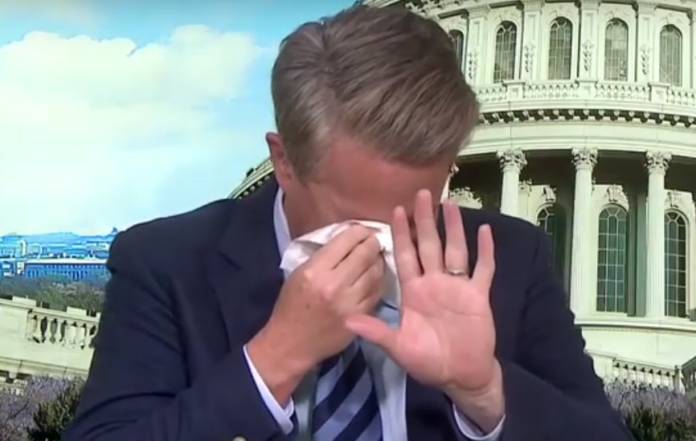 “Morning Joe” once again paid tribute to Herman Cain and his failed 2012 presidential run in response to President Donald Trump nominating him to the Federal Reserve Board this week.

Cain dropped out of the race in late-2011 after sexual assault allegations surfaced, but his campaign had already been doomed due to his wacky behavior on the campaign trail and his lack of knowledge about foreign policy. Of course, Cain ended up being just a precursor to Trump.

But the hosts could not resist playing an ode to Herman Cain they had aired after his campaign ended, complete with music by Sarah McLachlan and Celine Dion.

“You know, Joe, I forgot how long our goodbye to Herman Cain was,” Willie Geist said after the supercut finished. “He’s still with us, by the way.”

Joe Scarborough was either acting sad or he was wiping away tears of laughter.

“He was the precursor to the 2016 nominee,” Donny Deutsch chimed in. “If you looked at what he was doing the way he presented himself, the lounge act, that was a precursor to what showed up four years later.”

“Please, please, don’t talk politics at a time like this — the memories,” Scarborough hilariously begged his colleagues. “I was thinking of Redford and Streisand and ‘The Way We Were,’ then meeting again at the end. This is kind of like, Herman coming back into our life is kind of like Redford, and Streisand reaching out and just touching him on the cheek.”

In all seriousness, Herman Cain is a terrible choice for the Federal Reserve, especially since Trump is trying to stack it with cronies who will do what he wants instead of what’s best for the economy.

“Cain has said — repeatedly — that the United States should return to the gold standard,” she wrote. “This stance is one Moore has also intermittently espoused, and it has been roundly rejected by actual economic experts. That includes, for instance, every single economist surveyed by the University of Chicago’s IGM Economic Experts Panel.”

Also, Cain is a grifter just like Trump, so putting him in a position of power on a regulatory board is simply not a good idea.

“Cain spent the years following his failed presidential campaign spamming his email followers with snake-oil scams, promising ‘weird tricks’ that would make his followers get rich quick or ‘naturally’ cure their erectile dysfunction,” Rampell continued. “Of course, such grifting might enhance Cain’s candidacy in Trump’s eyes, but it hardly bodes well for a man seeking to join an institution with consumer protection duties.”

This nomination should be squashed by Congress. But seeing as how Senate Republicans don’t give a damn about the damage Trump is doing to the country, it looks like Cain and Moore will both be on the Fed, which means our monetary policy is about to take a hit at a time when the economy is already teetering toward recession.