The United States Blues
Home News Morning Joe Hosts Humiliate Trump For Getting His A** Handed To Him... 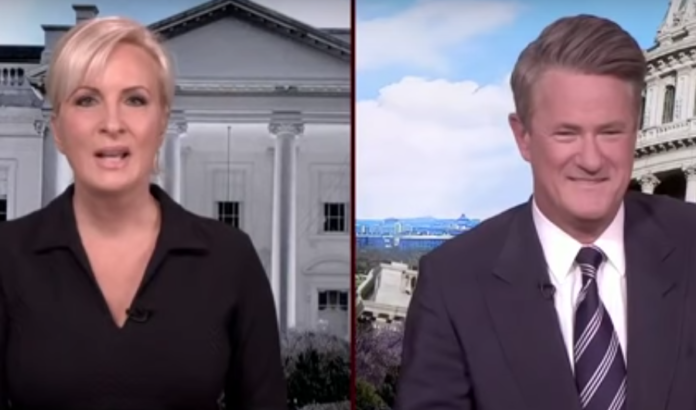 During the Oval Office meeting in front of reporters with cameras rolling, Trump made a fool of himself as Pelosi and Schumer repeatedly took him to the woodshed on everything from his demand for wall funding to government shutdowns and the 2018 midterm election.

It was so embarrassing and damaging to Trump, in fact, that he stormed out of the room afterwards and pouted.

And Morning Joe hosts Joe Scarborough and Mika Brzezinski relished every second of it.

Mika began by observing that Trump made himself look like a clown while Democrats looked like the responsible adults in the room as America watched.

“At his worst, Donald Trump has been a bully and a clown his entire life, but yesterday it was his worst traits on display for all the world to see, live from the Oval Office,” she said. “The president was embarrassing and undignified in his fight with Nancy Pelosi and Chuck Schumer. Some of his fans may have liked it, but most Americans do not. This is the type of wretched behavior that led to the Democratic landslide last month. There is no upside for Trump or his minions after that. Instead, Mr. Trump embarrassed himself. He weakened Republicans’ hands in the budget talks and drove a wedge between himself and Senate Republicans he will need if he is impeached by the House.

Then Scarborough chimed in by mocking Trump’s poor performance against seasoned politicians.

Indeed, after Pelosi reminded him that he doesn’t have the votes in the House for his wall funding, Trump proceeded to brag about winning Senate seats in North Dakota and Indiana, which are red states where Democrats had significant disadvantages to overcome. That resulted in a comeback from Schumer.

“When the president brags he has won North Dakota and Indiana, he’s in real trouble,” he quipped.

Already flustered because his whole election narrative just went down in flames, Trump went on to directly tell Schumer that he is willing to shut the government down and take the blame for it.

“I am proud to shut down the government for border security, Chuck,” Trump said. “I will take the mantle. I will be the one to shut it down. I’m not going to blame you for it.”

That turned out to be a massive mistake because now Trump and Republicans will be blamed if the government shuts down.

“This is the first time in Donald Trump’s life that he’s had people talking back to him, that people had political skills and knew how to trap him,” he said. “You can go back to the debates and he would run over people like Marco Rubio, he would run over Rand Paul, the other 16 people who were completely hapless in responding to this.”

Trump is a disgrace and he proved it again on Tuesday during his meeting with Democrats, who had previously offered to meet with him in private. But Trump wanted a public meeting because he thought he could put on a show that would make himself look good. He failed miserably.