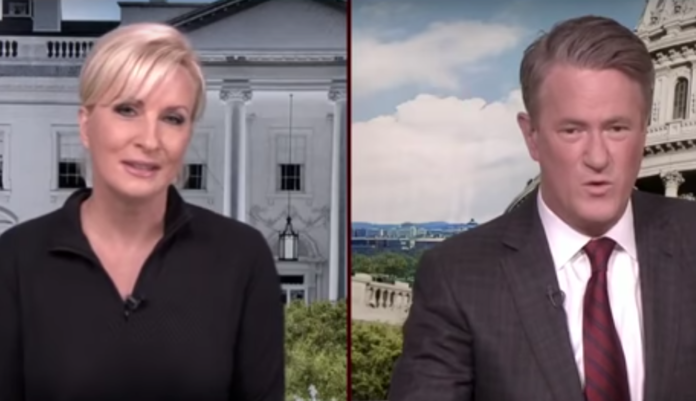 President Donald Trump’s temper tantrum aimed at Special Counsel Robert Mueller occurred so late in the morning on Thursday that the hosts of Morning Joe had to wait until Friday to mercilessly mock it.

Trump fired off several tweets attacking Mueller and the Russia investigation after going quite a spell without mentioning Mueller at all. But now that Democrats are set to take control the House and Mueller appears ready to make an announcement that could include another round of indictments, Trump couldn’t stop himself from lashing out, especially after he fired Jeff Sessions and appointed Matthew Whitaker as Acting Attorney General in an effort to sabotage the probe.

Just as conservative writer Max Boot explained the day prior, Morning Joe host Mika Brzezinski opined that Trump is losing his sh*t because he is being cornered by Mueller’s questions, which he must provide written answers to without perjuring himself or admitting to wrongdoing. And that puts Trump in a spot he doesn’t want to be in.

“He’s getting the questions from Mueller and freaking out,” Brzezinski said. “I know one cannot make that connection, but one can certainly surmise that at the time the questions from the Mueller probe are coming into this White House, at the time Democrats have control and the president is finally being educated of the fact that there is nothing he can do when he is compelled to hand over his tax returns and answer questions. The president finally realizes for the first time in his life he is cornered and there is nowhere to go, and at the time that one might surmise his son is potentially on the list of those that might be indicted that this president is freaking out.”

Donald Trump Jr’s role in a meeting with Russian agents to get “dirt” on Hillary Clinton in the middle of the 2016 Election certainly does look like collusion. Former Trump adviser Steve Bannon even called the meeting “treasonous” during an interview once.

Scarborough quipped that everything in Trump’s tweets are “either projection or confessional.”

It really doesn’t look good for Trump Jr., and the fact that Democrats can now subpoena Trump’s tax returns and finally expose them to the public is clearly terrifying him to the point where he is exhibiting even worse behavior that will likely get even more extreme. That’s what panelist Donny Deutsch thinks at least.

Deutch even compared to Trump to bumbling villain Dr. Evil to describe how pathetic Trump is acting.

“The absurd moves he makes will get heightened,” he said. “We’re seeing a different guy now. Donald Trump a few weeks ago was scary, he was a Bond villain like Goldfinger, now he’s more like Dr. Evil, where he comes on and instead of getting angry, you kind of almost chuckle. There’s a patheticness to him that’s starting to show that hasn’t been there in the past.”

Will they though? After all, Republicans have tolerated the worst of Trump’s behavior for the last two years and many are starting to emulate him because they think it’s a winning strategy. They’ve refused to do something about Trump’s behavior up to this point. It certainly doesn’t look like they will do anything about it now. Make no mistake, Republicans are complicit in this by enabling such behavior and they will probably side with Trump no matter what he does or says, even if Mueller reports that Trump did, indeed, obstruct justice, which Joe Scarborough pointed out that Trump obviously committed by firing former FBI Director James Comey and has since bragged about to NBC’s Lester Holt and the Russian foreign minister inside the Oval Office.

“He just walks into it,” Scarborough said. “Maybe for Christmas this year, somebody can just get a stamp and, just make it easier for him, that says ‘obstruction’ on it and just stamp it on his forehead. It’s so obvious. You look at what he said to Lester Holt, what he told the Russian foreign minister, what he told the Russian ambassador of the United States about the firing of Comey. He obstructs in the light of day.”