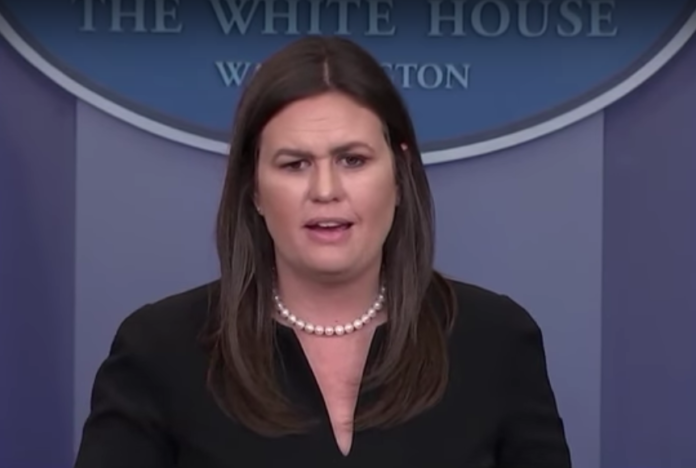 White House Press Secretary Sarah Huckabee Sanders blatantly lied to America – again – for President Donald Trump this week, and Morning Joe called her out for it on Thursday.

Earlier this week, Trump avoided identifying Russia as a friend or enemy and claimed that nobody has been tougher on Russia than him.

“We have failed to impose sufficient cost. Perhaps he believes that our free nations are weak and will not respond.”

So, when asked about the contradiction, Huckabee Sanders literally put words in McMaster’s mouth, claiming that McMaster agrees with Trump and that he said Trump has been tougher on Russia.

But that’s a lie as Morning Joe’s Joe Scarborough pointed out.

After playing video of both Trump and McMaster giving their statements, and video of Huckabee Sanders making sh*t up, Joe Scarborough hammered her for lying:

Indeed, Trump has been viciously lying about Amazon to hurt CEO Jeff Bezos just because he happens to own The Washington Post.

But the lies about McMaster are far more brazen and dangerous because our national security is at stake and Trump is lying about what a United States military general is saying about Russia.

“McMaster never said that no one’s been tougher on Russia than Donald Trump — that is a lie, full stop. Sarah Huckabee Sanders lied yesterday again — that’s a lie. She also lied when she said that, when she denied that McMaster said the quote was we have failed to hit them enough, and again, she lied about that, as well.”

Scarborough wondered what it would take for Trump to stop pretending that Russia is our friend because he sided with Russia over our true allies, and that’s a serious threat to our national security and that of Europe.

“Donald Trump also — it’s just saying we’ll find out later whether this man is an enemy or not to the United States, when he’s interfered with our democracy, he’s attacking our closest ally, the one we’ve always had a special relationship with, killing people on British soil? I mean, what exactly does this man have to do in Syria with Iran, in great Britain, in Ukraine, across the world for Donald Trump to realize that he’s not his friend?”

Scarborough noted that former Secretary of State Rex Tillerson called Trump a “fucking moron” because he refused to acknowledge the history of our national security strategy since World War II.

He further pointed out that Trump is surrounding himself with people who will agree with him no matter what and who will tell lies for him.

“Trump will be called out by history.”

As Russia continues to get more aggressive around the world, including in the United States and our elections, Trump has done nothing to counter this growing threat. He acts like Putin is his best friend. And it makes one wonder if Putin really does have something on Trump that is keeping him from challenging Russia as a real president would.