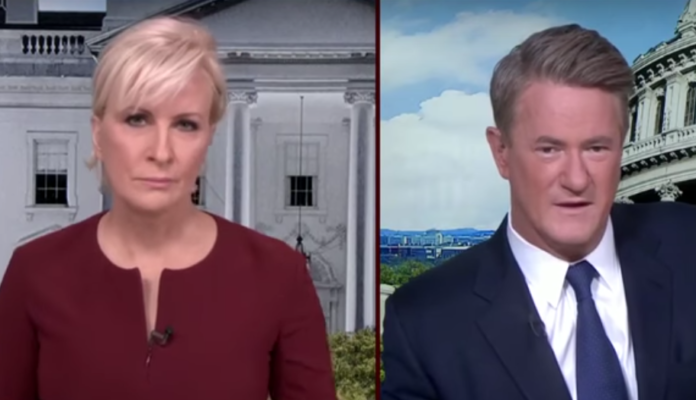 Trump’s behavior since last Tuesday’s election results has seemingly gotten worse as he has attacked Republicans, banned a CNN reporter from the White House, skipped a World War I ceremony honoring Americans killed in action, is whining about the recount in Florida, threatened NATO allies, and blamed California for wildfires.

Scarborough began by pointing out that Trump’s rampant misogyny resulted in 100 women being elected to Congress this year. It’s clearly a backlash against Trump and the Republicans who have allowed this behavior to go on unchecked and unchallenged.

Panelist Donny Deutsch chimed in by observing that Trump can’t handle being a loser.

“Donald Trump’s brand to him has always been, more than anything, winning,” he said. “Roy Cohn taught him, even when you lose, you won. He lost last week, he has a big ‘L’ on his forehead. Donald Trump is now a loser.”

And that’s why Trump is lashing out and behaving worse right now. He lost and can’t stand it, so he is doubling down.

Scarborough responded by observing that it really looks like Trump is pandering to white nationalists and that doing so only shrinks the Republican Party by causing moderate to swing the other direction.

“He can’t afford to lose a single vote from 2016,” said. “He already lost by almost 3 million votes. This is going in a very, very bad direction for the Republicans, as it has been for a very long time. The only difference is now Republicans actually have the evidence in front of them that voters reject this. We’ll see how they respond.”

Indeed, Republican speechwriter John Podhoretz had warned that Democrats are now in position to capture 400 electoral votes in 2020, a number that would crush Trump and the GOP, perhaps even cripple the party for years to come as it struggles to move past Trumpism.

Brzezinski then concluded the segment with a knock-out blow.

“The behavior really shows to me, from knowing the man, the completely cornered, doddering dictator wannabe — that is the behavior that we’re seeing,” Brzezinski said. “He’s angry and out of it.”