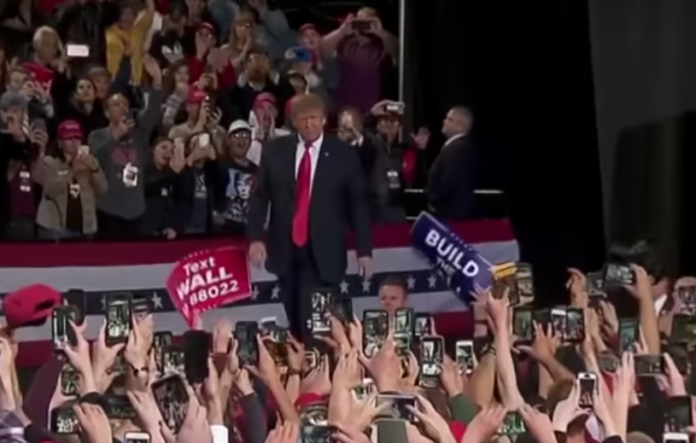 Trump supporters looked like complete idiots on Monday as they cheered every time President Donald Trump claimed to be already building his wall even though no such wall is being built. And Morning Joe hosts Joe Scarborough and Mika Brzezinski mocked them for it.

Trump held a rally in El Paso, Texas this week to promote his wall, which Congress has tentatively agreed to provide $1.35 billion towards, and only to build additional fencing at that.

Up to now, Trump only had the approval to repair or replace existing sections of the border barrier, so none of his wall has been constructed despite his claims.

But he made the same claim again anyway on Monday night, and his supporters went wild about it, resulting in the Morning Joe panel discussing how gullible Trump supporters are on Wednesday morning.

“We saw the other night all these people in El Paso applauding and jumping to their feet when Donald Trump said ‘we’re building the wall, go to the Rio Grande, check it out.’ They’re in an alternative reality anyway. We’ve had the president lying to his supporters for two years now saying he’s building the wall when no building has begun.”

Scarborough then surmised that Trump supporters can’t possibly be so stupid that they don’t know he’s lying to them.

Mika pointed out that Trump’s wall is just like his steaks or any other product he claims is the best but isn’t.

Princeton professor Eddie Glaude Jr. said that the wall is just a monument to fear and hatred before Mika chimed back in.

“It all seems racist, sorry,” she said.

So, Trump supporters aren’t necessarily stupid. They likely know Trump is lying to them but they don’t care because they are racists who want a wall to stop brown people from entering the United States. Either way, however, these people are frightening and represent a threat to reason and reality. Because any citizen who willingly allows themselves to be lied to by a politician is a danger to our democracy.