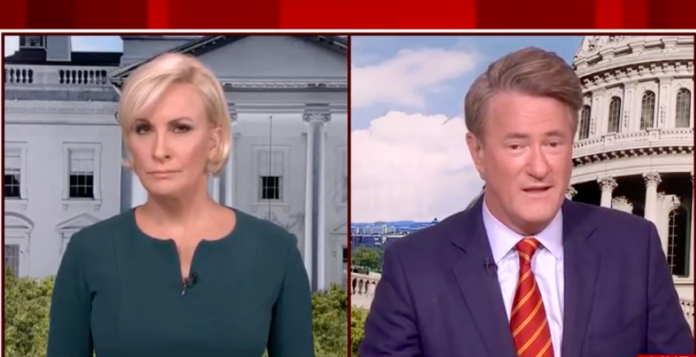 Morning Joe host Joe Scarborough laid waste to Senator Lindsey Graham (R-S.C.) on Wednesday morning for prostituting himself to President Donald Trump so much that he supports overriding the Constitution with executive orders against birthright citizenship.

Trump announced on Tuesday that he is going to sign such an executive order, which does NOT have the power to overturn the 14th Amendment, which clearly states that “all persons born” here are citizens under the jurisdiction of the United States.

And it didn’t take long for Graham to get on both knees for Trump on the issue.

Finally, a president willing to take on this absurd policy of birthright citizenship. https://t.co/kCa0ko7P76

In addition, I plan to introduce legislation along the same lines as the proposed executive order from President @realDonaldTrump.

This is a case of ‘first impression’ and I support President @realDonaldTrump‘s efforts to have the Court review this matter.

I will be introducing legislation to deal with the issue of birthright citizenship for children of illegal immigrants — in a prospective manner — as I have always contended it has become a magnet for illegal immigration in modern times.

But the fact is that a constitutional amendment cannot be changed or overturned via an executive order. Such an action is a blatant assault on the Constitution and is flagrantly unconstitutional.

In response, Scarborough humiliated Graham for being Trump’s toady, especially since his good friend the late Senator John McCain never stooped to such a low.

Indeed, legal experts on both the right and the left agree that Trump cannot end birthright citizenship with an executive order. Such a move is dictatorial and is an attempt to overrule the will of the American people.

Scarborough then wondered how Graham’s alma mater feels about his support of Trump’s executive order, especially seeing as how Graham graduated with a law degree from there.

“I just wonder, what does the University of South Carolina School of Law think right now?” he asked. “What do they think that a guy that graduated from their program really thinks that you can tear up the 14th Amendment by signing an executive order?”

“I don’t think Lindsey thinks that but it shows you how shameful he has become in John McCain’s passing and how stupid Donald Trump thinks the American people are,” he continued. “It is a clear call to racists to come out and vote for his candidates.”

It should be pointed out that Trump’s effort to end birthright citizenship would impact all citizens of the United States. Birthright citizenship would no longer be guaranteed for anyone, even if your skin is white. But people of color would especially be impacted as the 14th Amendment was also ratified to grant citizenship to former slaves and their descendants. Without that protection, racist conservatives could call for stripping citizenship from black people and move to deport them even if their families have lived here for generations and know no other homeland.

This is why it is so important to vote on November 6th. Americans should be outraged and worried about this attack on the Constitution that Trump swore to defend. Clearly, he lied when he repeated the oath and it’s up to Americans to hold him accountable by punishing Republicans at the polls.

Because birthright citizenship is not just a right for people of color and immigrants, it’s a right that belongs to all of us.