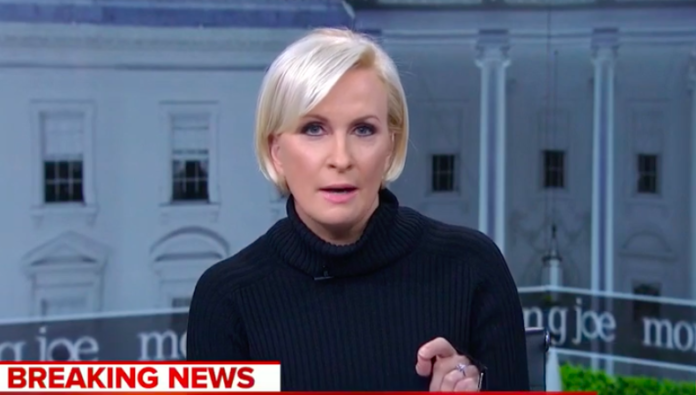 After President Donald Trump attempted to blame the media for the spree of suspicious packages containing bombs that have been mailed to his political opponents and critics, Morning Joe host Mika Brzezinski strongly condemned him.

It’s no coincidence that all of them have been critical of Trump and have been attacked by him repeatedly.

But rather than blame the bomber who is targeting his perceived “enemies” or take any responsibility for his rhetoric inciting violence and hate, Trump took to Twitter on Thursday morning to blame the media instead.

And that was enough to draw sharp condemnation from Mika Brzezinski, who asked voters to check Trump’s power and punish his inciting remarks on November 6th before he gets someone killed.

“You have the president of the United States tweeting about hate, tweeting against media, whom he has called the enemy of the people,” she began. “When the media was one of the targets yesterday, where people could have been killed. This is a whole new level of where we’re at, and it is very hard to understand the mindset of a man who would say that this morning.”

“At his rally last night, while he didn’t lash out at the media, while he didn’t lash out too much at his Democratic counterparts, he actually made fun of his earlier comments where he, as if perfunctorily was reading a script about unity that was prepared by his staff,” Mika pointed out in reference to Trump’s earlier statement about the bombs. “The president mocked his staff that urged him to plead for calm, to plead for unity, the president mocked everybody who is a citizen of this country when he made fun of the fact that he was behaving just for a moment. ‘Look how well we’re behaving, let’s see how long it lasts.’”

“Right now, we’re at a moment where if you want to check this president, you might want to consider early voting,” she concluded. “You might want to consider voting on Election Day. This isn’t an anti-Trump dialogue that I’m putting out here — this is anti-violence, this is pro-America. This is for our safety. Because at this point what we have in our president is someone who’s not thinking about that right now. So we need to. That’s all I ask.”

Trump and his supporters have become increasingly dangerous to the point where his critics and political rivals have targets on their backs. And that could easily extend to ordinary Americans who criticize or oppose Trump. Escalation is a real possibility as long as Trump has power, and that means it is more important than ever before to stand up to him by voting this year and again in 2020.