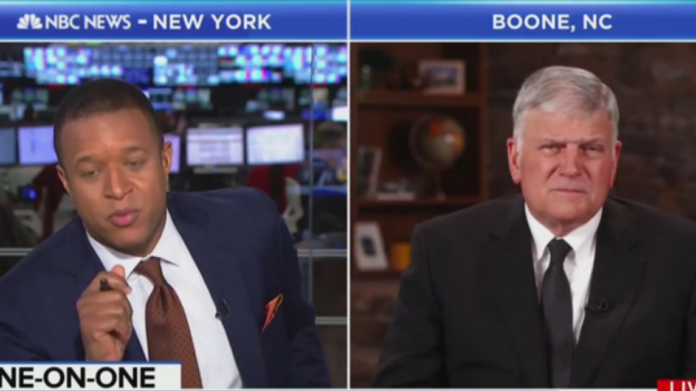 Franklin Graham is, among other things, an evangelist and fervent supporter of President Donald Trump, the most immoral man to ever sit in the Oval Office, which means that Rev. Graham is also a enormous hypocrite.

Graham proved the full depths of both his willful ignorance and hypocrisy on MSNBC Wednesday when he told host Craig Melvin that he wasn’t sure that Trump ever lies.

The conversation began with Melvin referencing the fact that the Washington Post has counted 8,158 lies told by Trump since he took office two years ago. How do you reconcile that? Melvin wondered. To that, Graham replied:

But Melvin wasn’t about to let Graham slide with that ridiculous assertion, reminding him:

“Pastor Graham, you and I both know this president has said things over and over that aren’t true.”

That led Graham to shift into full denial mode, a frequent defense for those who refuse to see the truth about just how vile Donald Trump is:

“No, I don’t know that. I don’t sit around and try to find every fault in the president every day, looking for everything that he might have misspoken or mis-said. I don’t do that.”

Once again, the MSNBC host used logic, which is almost always lost on Trumpkins:

“But you can acknowledge that the president has said things that aren’t true.”

Graham was undeterred, doubling down on his faith in Trump:

“I don’t think the president is sitting there behind the desk trying to make up lies. I don’t believe that for a second. Has he misspoken on something? Sure, all of us do that, you do it, I do it.

“So I think the president is trying to do the best that he can under very difficult circumstances. But no one person can fix this, it’s too complex. We need God. As a nation, we’ve turned our back on God.”

Actually, so-called “Christians” have turned their backs on reason, logic, facts, and science. They’ve also chosen to cast their lot with a man who is the very definition of immorality and wanton disregard for the plight of others. And they’ve done so in direct defiance of what Jesus taught.

“There are things that Donald Trump has said over and over again that are just flat out wrong. I don’t know whether Franklin is being willfully ignorant or is covering for the president but that undermines his message about objective truth.”

There’s a verse of the Bible that Franklin Graham needs to take a close look at: