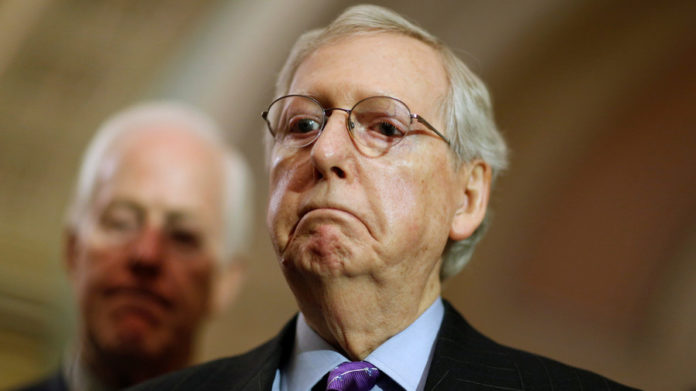 Showing a graphic of the 20 Republicans who are up for re-election in 2020, O’Donnell noted:

“They will look at their polling in their states and they will look at what their next six years of life in the United States Senate would be if they win re-election. And they will see that they will either be re-elected into another four years of humiliation in service to the madness of the Trump presidency, or they will be re-elected into the first four years of a Democratic president where their only function will be trying to block presidential appointees to federal judgeships.

“Both of those are dreary scenarios for Republican senators.”

But perhaps the person who least needs the frustration of trying to deal with Trump, O’Donnell noted, is McConnell:

“There will be more Republican senators announcing that they will not run for re-election, and the Republican senator with the strongest incentive to not run for re-election is the one with the very worst polling numbers back home in his state — a 33 percent approval rating. At the end of next year, he will have served 36 years in the United States Senate and the voters in his state do not appreciate the 35 years of service that he’s already given them.”

How exactly does Trump repeatedly humiliate the Senate Majority Leader? O’Donnell spelled it out perfectly:

“Donald Trump humiliated Mitch McConnell and became the first president in history to shut down the government when both houses of Congress were controlled by his own party. Mitch McConnell knew that was going to end very badly for the Republicans and Donald Trump — and there was nothing that Mitch could do about it.

“There has never been a more powerless majority leader of the Senate than Mitch McConnell, in his relationship with the president.”

All of this means, the MSNBC host concluded, that McConnell is about to bow out:

“Donald Trump drove Paul Ryan out of office — and lost the House of Representatives for the Republicans while he was at it.

“Next year could be the last year of the humiliation of Mitch McConnell.”