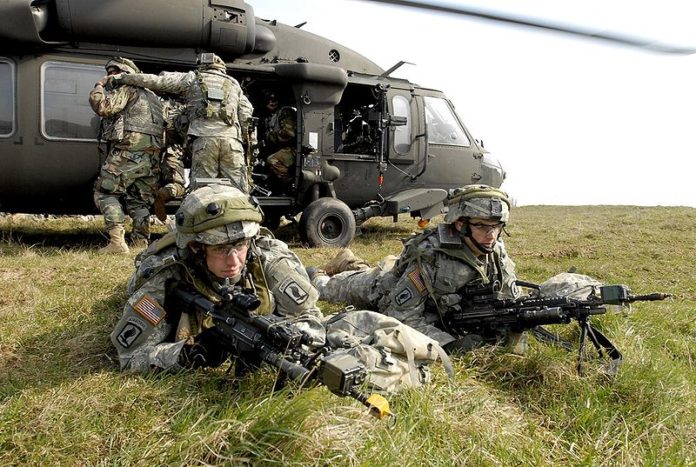 President Donald Trump is once again demonstrating that he has no idea how our military alliances work by trying to shakedown our allies into paying for American troops they host for their security and our own, drawing sharp criticism from MSNBC host Joe Scarborough.

America’s national security is being threatened by Trump around the globe as he reportedly prepares to demand money from our allies who have hosted our troops in their countries for decades since World War II.

Under White House direction, the administration is drawing up demands that Germany, Japan and eventually any other country hosting U.S. troops pay the full price of American soldiers deployed on their soil — plus 50 percent or more for the privilege of hosting them, according to a dozen administration officials and people briefed on the matter.

In some cases, nations hosting American forces could be asked to pay five to six times as much as they do now under the “Cost Plus 50” formula.

But our forces are in these countries for our own benefit, not just to protect our allies.

“Even raising this question feeds a misinformed narrative that these facilities are there for the benefits of those countries,” said Douglas Lute, a former U.S. ambassador to the North Atlantic Treaty Organization. “The truth is they’re there and we maintain them because they’re in our interest.”

In Germany, for instance, the U.S. relies on several crucial installations: the Landstuhl Regional Medical Center and the Ramstein Air Base. Landstuhl is a world-class medical facility that has provided emergency care to U.S. soldiers wounded in Iraq and other trouble spots.

Our allies could scoff at Trump’s demands, which would result in troops being withdrawn. And that would make our allies vulnerable to attacks by Russia and North Korea and other enemies.

For instance, Trump’s demand for South Korea to pay more for the 28,000 troops we deploy there nearly resulted in failed talks that would have severely weakened our position in Southeast Asia.

Withdrawing troops and closing bases would also damage us logistically since we rely on our allies to launch military operations from bases closer to war zones. Our troops would also lose combat and medical support as well as crucial training.

In short, Trump is threatening to derail our own national security and the security of our allies because he thinks our military should be treated like paid mercenaries that only fight for the highest bidder. Our allies already pay part of the costs of hosting our troops, but we pay more because they are our troops and we need the military presence as part of our own national security infrastructure, which has kept America and our allies safe for over 70 years.

This amounts to extortion against our own allies by a president who treats everything as a business transaction. Russian dictator Vladimir Putin and the rest of America’s enemies must be absolutely overjoyed by what Trump is doing. He is literally destroying our alliances and dismantling the most successful national security strategy the world has ever seen. And it won’t be long before our enemies take full advantage of Trump’s incompetence.