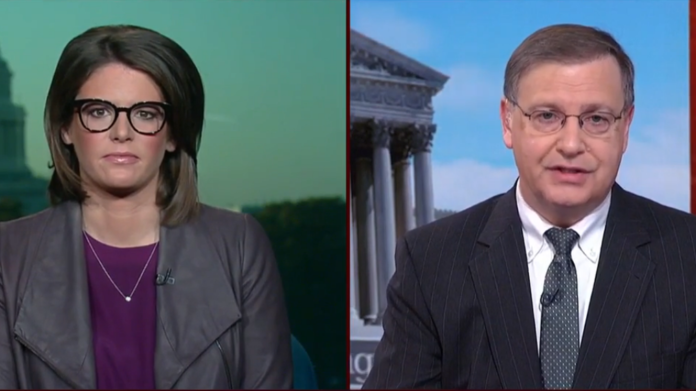 Now that we know President Donald Trump has provided written answers to questions from Special Counsel Robert Mueller, one unresolved matter remains: Will Mueller insist that Trump provide testimony before a grand jury?

Former U.S. Attorney Chuck Rosenberg, said Wednesday morning on MSNBC that while the president and his attorneys may try to prevent Trump having to give any other responses, that’s a losing proposition:

“So if this thing has to be litigated — for instance, if Bob Mueller decides he needs the president’s testimony on the obstruction issue and wants to push that issue, it’ll be decided by a court, not by White House counsel, not by Mr. Trump’s personal lawyers. It’ll be decided by a court. By the way, for what it’s worth, I think the court precedents line up nicely for the prosecutors in this.”

As for the assertion that a president is protected by the office he holds and Trump might try and claim executive privilege as a way to dodge testifying, Rosenberg presented a more frightening possibility for the White House:

“If the president is a target of this investigation, what we call someone likely to be charged, policy is you don’t issue a grand jury subpoena in the normal course to a target.

No matter how he tries to wiggle out of the legal mess he’s in, Trump has no escape route. And even if he does manage to dodge being indicted by Mueller, states such as New York are still free to charge Trump and other prominent figures from the 2016 campaign.

Donald Trump won’t escape justice, no matter what he does. That much seems certain.