The United States Blues
Home News MSNBC Panel: Fox News Will Either Go Down With Trump Or Turn... 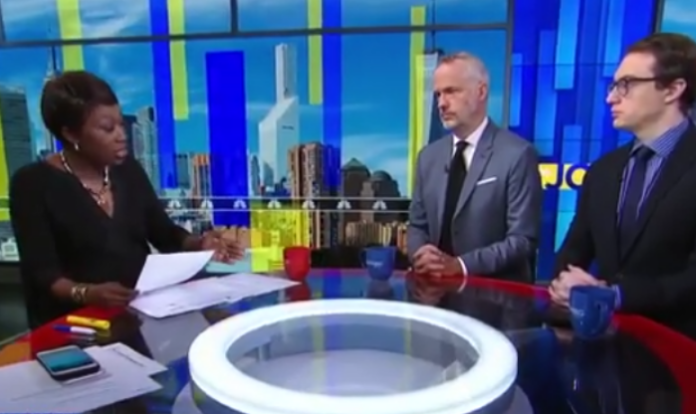 As President Donald Trump gets in deeper and deeper legal trouble, Fox News is struggling to defend him, and that’s why MSNBC contributor Gabriel Sherman believes the conservative network will either go down with the ship or turn against him.

Even while Fox News has gone to great lengths to insist that Trump has committed no crimes and that investigations against him are nothing more than “witch hunts,” the facts are getting out and many hosts and anchors are unable to ignore the legal reality.

Fox anchors such as Shep Smith and Chris Wallace stick to the facts and hard news as much as possible. The conflict arises when the network’s commentators, most of whom are in the bag for Trump, go on the air. At that point, everything is just one big propagandist lie in support of Trump no matter what.

But legal analyst Andrew Napolitano, a former judge, can’t just lie about what legal documents and plea deals are telling him. He has to give his honest analysis because his professional life and reputation is all about the law. Of course, that’s not what Fox hosts hope he will do when he appears on their shows, which is why Fox & Friends host Steve Doocy seemed perturbed this week when Napolitano told him that Trump has committed a crime.

His reaction amused MSNBC’s Joy Reid who observed that Fox News looks like it is at a crossroads.

“Are we seeing sort of a disturbance in the force?” she asked Sherman. “Some people at Fox can’t stay on the talking points.”

“I love in the clip where Steve Doocy was shocked,” Sherman replied. “He was like — there was like a glitch in the Matrix and suddenly like truth came through and he said, ‘What crime had he committed?’”

Sherman agreed that some Fox News employees are starting to recognize the legal reality that Trump faces, but said that the network still largely supports Trump. Overall, it will be up the audience to determine which direction the network goes. If the audience becomes convinced that Trump broke the law, Fox News could turn on him. If not, they will sink with Trump.

“I think there are moments but I think ultimately, you know, the network is still behind him,” Sherman continued. “The question is when does the audience turn on Trump? This is a ratings game for Fox. If they start to see the ratings erode, you’ll see more and more hosts break with the Steve Doocy.”

And that’s going to be tough seeing as how Fox News regularly feeds bullsh*t propaganda to viewers who already believe the Russia investigation is a “witch hunt” and that the fix is in by the “Deep State.”

“When the viewers of Fox News hear that or hear Shep Smith who breaks it down and keeps it real, is that something they view as their network being fair and balanced or is this something that they just utterly reject and ultimately management says do less of that?” Reid asked.

Boehlert went on to predict that 2019 will be more of a legal battle than a political partisan battle.

Sykes said that Fox News is a “safe space” for conservatives who don’t want to hear or accept the truth, but “facts are stubborn things” and reality slips in.

Sherman pointed out that Fox might just stop covering Trump so much and shift programming to other things like the imaginary “war on Christmas” just like they did when their viewers realized that former President George W. Bush’s handling of Hurricane Katrina was a disaster.

In short, Fox News will find red meat topics to cover as a distraction rather than report the truth their viewers don’t want to hear. But it’s pretty clear that Fox News’ allegiance to Trump over the last two years is about to come back to bite them on the ass because as it stands Trump is an unindicted co-conspirator known as “Individual 1” in court documents that allege he coordinated with and directed Michael Cohen to commit campaign finance felonies to hide his affairs during the 2016 election.

And now every organization Trump has ever led is under investigation, and that’s on top of the ongoing Russia investigation that has already resulted in multiple indictments, plea deals, and prison sentences.

The snowflakes who watch Fox need to prepare themselves because the facts are about about to rain down on them like never before, and the rule of law could be just the thing that pops the right-wing bubble they’ve been living in.