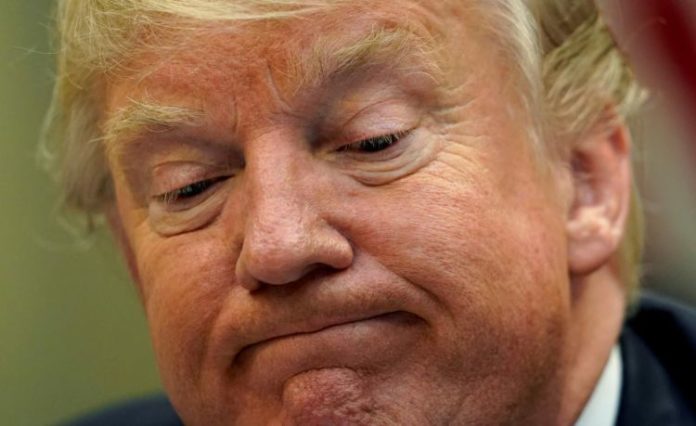 President Donald Trump is being ripped to shreds across the board on Friday after ordering a reckless airstrike against Iran, only to call it off at the last minute because he failed to ask how many people could die on both sides.

Trump ordered the strike in retaliation against Iran shooting down an unmanned drone, and ordered warplanes to attack, a move that would have resulted in a war.

However, after learning that around 150 Iranians would perish in the attack, Trump called off the strike at the last minute.

Some are hailing Trump’s restraint, but there is nothing restrained about Trump’s actions. He ordered the strike in the first place over a downed drone, a completely disproportionate reaction that would have had disproportionate consequences. Iran would have reacted by attacking American bases in the Middle East, resulting in the all-out war National Security Adviser John Bolton desperately wants to see.

“Reagan would have had a good plan, had an idea of how to execute it, would have executed it rapidly and it would have been over,” Stephens began. “He did that over the Gulf of Sidra in Libya in 1981, he did that again in 1988 when there was a one-day naval battle in which we sank about half of the Iranian operational fleet.”

Indeed, Reagan served during World War II, so he knew how military planning works, unlike Trump, who cowardly avoided military service during the Vietnam War by dodging the draft five times.

Stephens pointed out that Trump now looks weak to the Iranians.

“What Trump has done was demonstrate to the Iranians he is a Twitter tiger,” he said. “This is a guy who likes to speak loudly, is full of bluster, but the fact is he is not only a very cautious president, but he’s an extraordinarily disorganized president.”

He then criticized Trump’s incompetence and informed Republicans that Trump has done what they constantly accuse Democratic presidents of doing.

“You just have to ask yourself the kind of extraordinary breakdown in normal American governance that a president orders a strike, but only asks the follow-on question, is it proportionate?” Stephens said. “How many people on the other side are going to die, when the planes are already in the air? The accusation the Republicans always made about President Clinton, President Obama, is they were weak, hesitant, pulled out at the last minute, signaled weakness to our enemies, and Trump is actually fulfilling exactly that kind of stereotype as a Republican.”

The emperor has no clothes.
He also has no experience, impulse control, critical thinking skills, knowledge, interest in acquiring knowledge, reason, wisdom, humanity, respect for the Constitution, appreciation of expertise, humility, discipline, love of country or credibility. https://t.co/uqlxIxQylz

Regardless of what happened, the United States was seriously close to starting World War III in the Middle East on Thursday night all because Trump wanted to act tough on Iran and didn’t bother to listen to casualty assessments or ask for one before he gave the order.

This man has no business being commander-in-chief, and this incident demonstrates that once and for all.