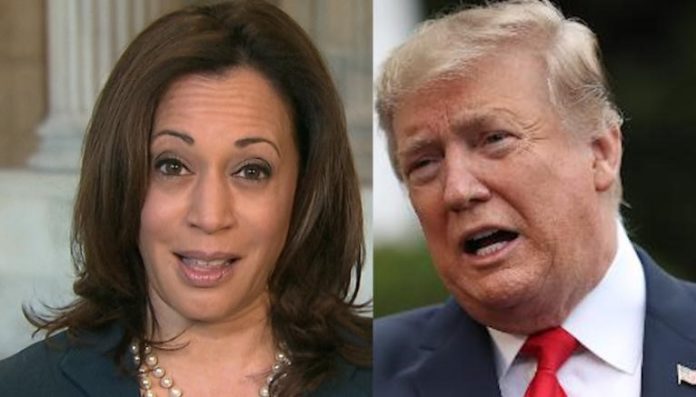 Even though we don’t yet know who will be nominated for Democrats to face President Donald Trump in the 2020 election, Trump is already attacking those vying for the Democratic nomination, referring to Joe Biden as “Sleepy Joe” and Bernie Sanders as “Crazy Bernie.” But he never ever takes cheap shots at Senator Kamala Harris (D-CA).

During a discussion of the 2020 race Thursday on “Deadline:White House,” Annie Karni of The New York Times noted:

“Kamala had the biggest start out of the gate with the huge crowds and has kind of stalled as [Joe] Biden got in and Bernie [Sanders] has this real core base of support.

“One other thing to note, in terms of her turning to Trump, I’ll be interested to see his reaction to her because she is notably one candidate in the wide field that he doesn’t seem to know how to take on or has settled on a way, he’s doing Sleepy Joe, Crazy Bernie, he made fun of Pete Buttigieg at his rally in Florida last night.

“All he said about her is she has commendable crowds. He hasn’t figured out a way to attack her yet.”

That’s when Wallace honed in on something that we should all keep in mind as the 2020 race continues in the months ahead: Crowd size is how Trump gauges support and popularity. Harris drew in excess of 20,000 to her campaign announcement rally:

“Her crowds spooked him.”

It’s also worth noting that Trump recently took a small jab at Harris after her relentless questioning of Attorney General William Barr when he appeared before the Senate Judiciary Committee, which Harris is a member of. Trump said Senator Harris had been “very nasty” with her grilling of the AG.

However, when she was asked about the president’s comments, Harris shrugged them off, noting:

“We have a President of the United states whose primary interest — I think that has been clear as a result of what we know from the Mueller report — has been to obstruct justice. My primary interest is to pursue justice, and you can call that whatever name you want, but I think that’s what the American people want in a leader.”

Kamala Harris is a strong woman of color who doesn’t take any crap from anyone. And as Trump has repeatedly proven, he’s afraid of any woman who stands her ground and pushes back on his bigotry.