The United States Blues
Home POTUS Mnuchin Comments On Trump’s Vulgarities By Saying We Need To ‘Focus On... 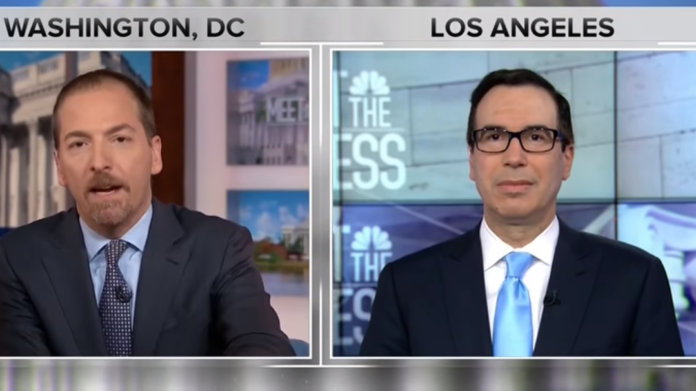 After spewing obscenities and insults at a campaign rally in Pennsylvania for a Republican Congressional candidate Saturday evening, President Trump sent his surrogates out to do damage control on the Sunday morning shows. First up was Treasury Secretary Steve Mnuchin.

Mnuchin appeared on Meet the Press, whose host, Chuck Todd, Trump referred to as a “son of a bitch” Saturday. Todd told Mnuchin:

“The president of the United States in the past has been a beacon of freedom of the press. Instead, last night, he was praising authoritarian figures in China and North Korea and encouraging boos of the American press.”

“Of course he believes in freedom of the press. And he believes, more importantly, in protecting democracy around the world. And that’s what we should be focused on, a week of policies.”

When Todd again referred to the rally in Pennsylvania, Mnuchin tried to duck out of responding by telling the host:

That led the host to retort:

“So, should we stop covering the campaign rallies? If it doesn’t matter what he says there, if we’re to dismiss everything he says at a campaign rally as I think you’re trying to imply, then are you saying we shouldn’t cover these things?”

When Mnuchin again said he was focused on policy and not rallies, Todd wondered:

“Many people including myself raise their kids to respect the office of the presidency. When he uses vulgarity to talk about individuals, what are they supposed to tell their kids? What are you supposed to say to kids?”

“Again, I think you should be focused on what the policies are. He’s using those vulgarities in the context of a campaign rally. And obviously there were a lot of funny moments on that rally.”

His voice dripping with sarcasm, Todd fired back:

“Yeah, they were hilarious.”