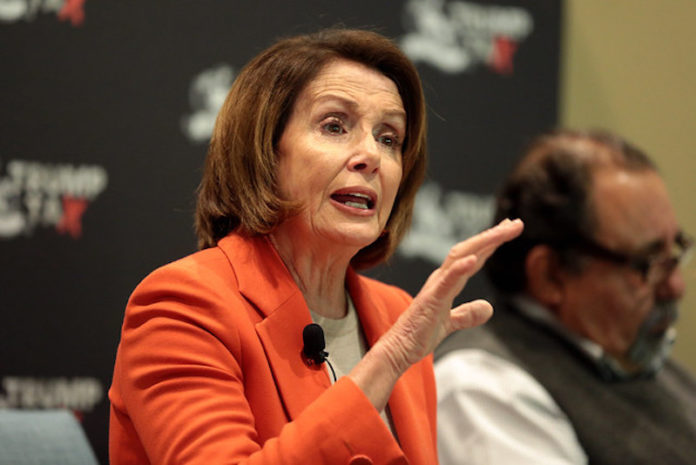 Any favor House Speaker Nancy Pelosi may have gained from her political masterstrokes during the Trump shutdown may be fading fast with progressives within the Democratic Party. In a recent New York Times report, Pelosi voiced her concerns about a 2020 election contest:

“Speaker Nancy Pelosi does not believe President Trump can be removed through impeachment — the only way to do it, she said this week, is to defeat him in 2020 by a margin so ‘big’ he cannot challenge the legitimacy of a Democratic victory.”

Pelosi fears that Trump will assault one of the most effective ways to remove an unpopular president — reelection. This fear also reared its head in 2016 (not without cause), with a media atmosphere bracing for a contest if Trump lost against Secretary Clinton.

According to the report, this is why Pelosi likes the growing progressive coalition within the Democratic Party — as long as they don’t go too far.

“Own the center left, own the mainstream,” she was quoted.

However, today’s progressives do not wish to own the mainstream, and in 2016, remain attached to presidential candidates like Bernie Sanders. This is not surprising, considering that the thesis of the senator’s campaign is basically that the status quo is the most aggressive factor for where America finds itself today.

Considering the recent dramatic developments in Congress in terms of the representation of young people, progressive voters feel more prepared than ever to contest the status quo, because it has never seemed weaker.

Commentator Peter Daou went so far as to suggest new leadership for the House of Representatives and the Senate.

That is a dangerous abdication of her constitutional duty.

We need new Dem leadership in the House and Senate.https://t.co/zrOqjrlXgJ

Veteran journalist Michelangelo Signorile also voiced his frustration with what he perceived as “wrong-headed” on Pelosi’s part.

This is so wrong-headed. Why the hell is Pelosi giving Trump the idea to contest the election — and telegraphing powerlessness in the face of it, urging Dems go “center”?

Jon Lovett, one of the hosts of the popular political podcast Pod Save America, alleged that many subsequent Pelosi stories strayed far from the original Times article:

Suggesting that staying in the center will mean Trump won't contest results would definitely be a VERY dumb thing to say. But she doesn't say that. She says that a decisive victory is necessary and then talks about how she believes we can achieve it.

Time will tell whether Pelosi has a solid foundation for choosing not to aggressively pursue impeachment, or voicing her concern about a 2020 election contest. However, despite her past successes against Trump, it’s likely that a significant portion of progressives in a party won’t trust her until she delivers them another victory.