The United States Blues
Home Politics Congress Nancy Pelosi explains to Ilhan Omar the difference between being an activist... 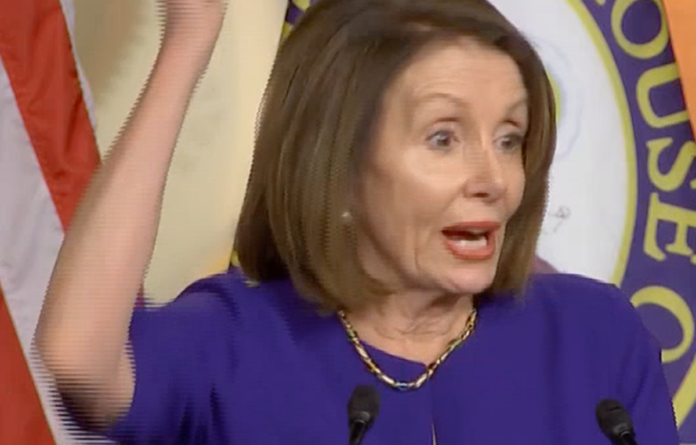 One of the two first Muslim women to be elected to Congress, Ilhan Omar, (D-Minn) has been the center of a controversy over her language about Israel. House Democrats decided to plan a vote on an anti-Semitism resolution in response. Now Speaker Pelosi is saying that she doesn’t believe the congresswoman is anti-Semitic. Appearing in a press conference, Pelosi downplayed Omar’s words as those of an activist like she once was, not a congresswoman.

Last month, Omar’s statements at a panel on the Israeli-Palestinian conflicts stirred up the controversy.

“I want to talk about the political influence in this country that says it is okay to push for allegiance to a foreign country,” Omar said as part of a discussion about past anti-Semitism allegations lobbed at her.”

House Democrats responded with the resolution that reads as a rebuke of Omar for possibly playing into anti-Semitic tropes “about Jewish attachments to Israel making them disloyal to the United States,” according to Vox.

House Democrats are planning to vote on an anti-Semitism resolution in response to Ilhan Omar’s recent comments about Israel. That plays right into Republicans’ hands — without addressing the real issues. https://t.co/wgpXlqV0YH

Omar had her defenders, who claimed she was unfairly attacked as a Muslim woman of color daring to be critical of Israel. Is it a case of Islamaphobia or of anti-Semitism? Was Omar singled out unfairly when the Republican standard for bigoted remarks seems so much lower than the Democrats?

“Republicans in the West Virginia Legislature put up a viciously Islamophobic poster connecting Omar to the 9/11 hijackers, without nearly as much fanfare as Omar’s comparatively tame comments.”

Omar’s Tweets from 2012 have also come back to bite her since they seem to similarly feed into anti-Semitic tropes.

One of the Tweets stated:

“Israel has hypnotized the world, may Allah awaken the people and help them see the evil doings of Israel.”

Omar apologized for this Tweet after taking office in January. But then in February, she tweeted another questionable statement, saying that support for Israel in Congress is “all about the Benjamins.”

The Democratic leadership publically condemned her comment, which again seemed to play into anti-Semitic tropes and a conspiracy theory. Once more, Omary apologized, but today the controversy it at a fever pitch due to the use of her charged language on a sensitive point.

Was Omar anti-Semitic or was she really trying to express a valid point of view, that she is quickly judged as a Muslim who wants to express her pro-Palestine positions?

Pelosi’s response indicates she is inclined to be sensitive to Omar’s position. She does not believe the congresswoman understood how her words would impact people now that she has “crossed the threshold” into a position of power in Congress.

“When you’re a congresswoman, you’re an advocate out there, as I was. So I appreciate all the enthusiasm that comes in. That was me carrying a stroller and carrying those signs,” said Pelosi with her hand help up.

“So I understand how advocates come in with their enthusiasms, but when you cross that threshold into Congress, your words weigh much more than when you are shouting it at somebody outside,” she continued.

“And I feel confident that her words were not based on any anti-Semitic attitude, but that she didn’t have a full appreciation of how they landed on other people, where these words have a history and a cultural impact that may have been unknown to her.”

OMAR: “Israel has hypnotized the world, may Allah awaken the people and help them see the evil doings of Israel.”

PELOSI: "Her words were not based on any anti-Semitic attitude.”

Pelosi has given Ilhan Omar the benefit of the doubt. What do you think of her position? Tell us in the comments.