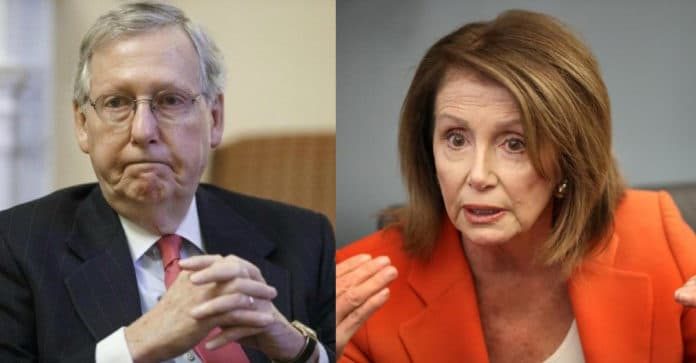 Speaker of the House Nancy Pelosi (D-CA) made it clear during her weekly press conference on Thursday morning that she thinks the reason Senate Majority Leader Mitch McConnell (R-KY) defends President Donald Trump no matter what he does may have something to do with McConnell’s connections to Russia and Russian money.

Asked about remarks the president made during an interview with ABC News in which Trump said he would indeed welcome a foreign government giving him damaging information on his opponent in the 2020 election, Pelosi noted:

“What is it about Mitch Mcconnell and the Republicans in Congress that they do not want to respond to what’s so popular across the board in our country? To take it back to your question. What is it about the Republicans in Congress? How much more can they bear of the president’s unethical behavior? That they think they’re honoring their oath of office.”

And then the Speaker drilled down and got very specific:

“I believe these are all connected. I think it’s all about money. Connect the dots in all of this. It’s all about money. Look at what the president is doing in terms of Saudi Arabia and the sale of nuclear technology as well as planes to Saudi Arabia. Follow the money. Who benefits from that? Declare a national emergency that he can by-pass congress in terms of those sales. By-pass the law in terms of transferring of nuclear technology to a country. Follow the money.”

Here’s what you find when you follow the money: A Russian oligarch made a $200 million investment in McConnell’s home state of Kentucky not long after McConnell blocked Democratic efforts to keep sanctions in place on that oligarch, a man by the name of Oleg Deripaska, who also happens to have numerous connections to Russian President Vladimir Putin.

Dirty money runs through the GOP and the Trump White House. Money from Russia, Saudi Arabia, and other countries that are either our sworn enemies or are seeking to buy favorable foreign policy decisions from the administration.

As we learned in Watergate, if you want to find the crimes, you follow the money trail.