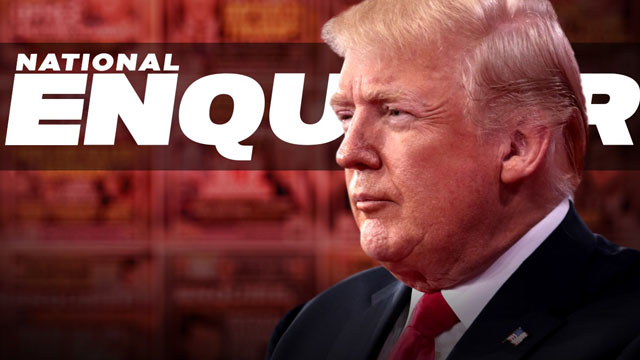 Staffers at the National Enquirer destroyed documents about President Donald Trump that had been held in a top-secret safe shortly before Trump was elected in 2016, according to a new book from Pulitzer Prize-winning journalist Ronan Farrow.

During the first week of November 2016, the book alleges that Dylan Howard, who was then editor in chief of the National Enquirer, ordered a staff member to “get everything out of the safe” and that “we need to get a shredder down there.”

His order came the same day a reporter for the Wall Street Journal had called the Enquirer to ask for comment on a story about how AMI, which owns the supermarket tabloid, had paid $150,000 to former Playboy model Karen McDougal who said she had had an affair with Trump to keep her quiet right before the election. The Enquirer never published her story.

According to Farrow’s book, entitled Catch and Kill:

“The staffer opened the safe, removed a set of documents, and tried to wrest it shut. Later, reporters would discuss the safe like it was the warehouse where they stored the Ark of the Covenant in Indiana Jones, but it was small and cheap and old.”

Trump has been a close friend of AMI CEO David Pecker for decades, and it is alleged that Pecker often protected the president from his sexual indiscretions and and misdeeds by buying the rights to embarrassing stories and then refusing to publish them, a well-known practice among some tabloids known as “catch and kill.”

One such story AMI successfully managed to put on ice involved a Karen McDougal, a former Playboy model who alleged she’d had a sexual relationship with Trump. Pecker and the Enquirer paid McDougal to keep details of the affair secret:

Late last year, AMI admitted its hush money payment to McDougal, which it said it had done to prevent her story from “influencing the election.” In an agreement with federal prosecutors that said AMI would not get charged for its role in the scheme, the company said it would cooperate with authorities.

Trump’s former personal attorney, Michael Cohen, funneled hundreds of thousands of dollars in hush money to women — including McDougal and adult film star Stormy Daniels — and is serving a three-year prison term for lying to authorities and campaign finance violations. Cohen is currently working with prosecutors in New York who are investigating possible crimes committed by the president and his company, the Trump Organization.