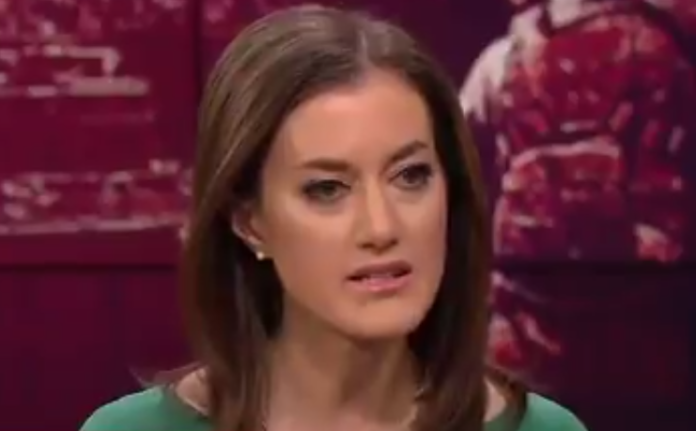 National security expert Samantha Vinograd warned that President Donald Trump is treating Russian dictator Vladimir Putin as his “shadow” national security adviser during a disturbing discussion about Trump’s contradiction of his own intelligence chiefs on the situation in several hot spots around the world.

Trump lashed out at his intelligence officials on Wednesday after National Intelligence Director Dan Coats, CIA Director Gina Haspel, FBI Director Christopher Wray, and NSA Director Paul Nakasone all agreed that ISIS has not been defeated, that Russia is still launching cyber attacks against us and that North Korea is still a nuclear threat.

During a segment on CNN’s New Day, host Alisyn Camerota explained how serious the situation is and turned to national security expert Sam Vinograd for analysis.

“Sam, you’re the expert,” Camerota began. “I want to start with you, in terms of – you know, as we know, President Trump decides foreign policy by feeling. He feels he has a good chemistry with Kim Jong-un. Therefore, Kim Jong-un must be telling the truth. He admires Vladimir Putin. Therefore, Vladimir Putin must be telling the truth. Peel back the curtain for us. Tell us what goes on in the White House before the national security advisers like that – the intel institutes I should say, come out and deliver an assessment like they did.”

Vinograd explained the process in detail.

“This isn’t just the director of national intelligence, the CIA director,” she continued. “It is coordinated assessments about what they all believe to be true. This assessment is typically delivered to the President. It’s often briefed to him verbally so that he can really plan what his priorities should be for the coming year. And importantly, get a sense of where his policies may or may not be working.”

Vinograd said that these assessments should cause the president to change his strategy and shift policy. Instead, Trump is calling his intelligence chiefs liars and doubling down on his narrative.

It “really begs a question of where is he getting his intelligence from?” she said. “If it’s not from his own experts, is it from his two sons? Is it from television? Or is it from the foreign leaders that he tends to meet with by himself without any note takers present.”

As it turns out, CNN host John Berman revealed a report by the Financial Times that Trump met with Putin in Buenos Aires in Argentina in November without a note taker or a translator or any other staffer to confirm what was said between them after Trump had previously nixed such a meeting. One of the topics apparently included Syria.

And that answered Vongrad’s previous question about where Trump is getting his advice.

“Well, I just answered my previous question which is, where does a president get intelligence and foreign policy advice from, essentially from Vladimir Putin who he’s treating as his shadow national security adviser in this case,” she said.

“He’s spending more time alone with him talking about sensitive issues, and getting insights from him, and giving information to the Russian government that his team may not have, that he may be spending with John Bolton or the intelligence chiefs,” Vinograd continued, going on to warn how dangerous this is.

And what this tells us is that the president really does not engage in the most basic counterintelligence hygiene. This G20 meeting came well after the Helsinki summit, when there was so much criticism about the President handing Vladimir Putin just manipulation points, in terms of what the Russians knew, and what the United States didn’t know.

He chose to make that same mistake again. We know that the President was the subject of a counterintelligence investigation a long time ago by the special counsel. We don’t know if that investigation has concluded.

But every time that he puts himself in these situations, it makes it so easy for Vladimir Putin to get more manipulation points on him. That really adds fuel to the fodder, and the conversation about whether there’s just something he’s trying to hide.

Clearly, Trump is listening to Putin more than he is listening to his own intelligence chiefs. That makes him a threat to our national security and risks blowing up the world rather than acknowledging that our problems are very real. Trump is trying to present a fake reality where he has solved all of our foreign policy issues and eliminated threats that have been around for many years. But such a reality doesn’t exist, and it’s time for Senate Republicans to call for Trump’s removal from office before his decisions really screw us over.