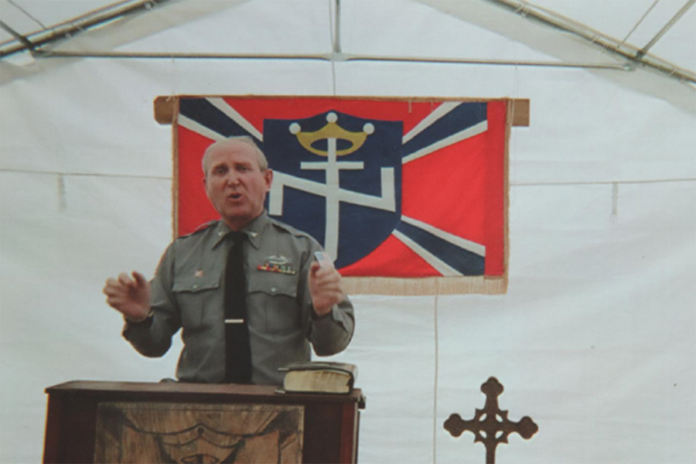 What a year we’ve had in the United States! In President Donald Trump’s America, those who carry hate in their hearts are free to exercise their bias in public with next to no reprimand. We saw the unnecessary destruction that such hatred could cause last summer in Charlottesville. Americans should be clearly standing up for our values: hatred will not be tolerated in the United States.

Instead, an actual Nazi is running for an uncontested congressional seat in the Chicago suburbs. And we should all be very, very worried.

Arthur Jones, a former leader in the American Nazi Party, loves to deny the Holocaust in front of the cameras. According to Huffington Post, he’s about to get the Republican nomination for the GOP seat in the heavily Democratic 3rd Congressional District.

And guess what? He feels no need to hide his connection to white supremacist organizations.

Jones’ campaign website shows him speaking at KKK and neo-Nazi events. He gives the Nazi salute and shreds the flag of Israel. Additionally, he has called the Confederate flag the symbol of “white pride,” “white resistance,” and “white counterrevolution.”

He recently told the Chicago Sun-Times that he believes the Holocaust to be “an international extortion racket.”

This Is Not Reality Television

In America, we watch our politics play out on television as if we’re tuning into a reality TV program. This cycle must be broken. Nothing about Jones’ candidacy is funny. Placed in a historical context, combined with the attacks from our executive and judicial branches on immigrants, communities of color, women, and the poor – all Americans should see a pattern here that is disturbing at a minimum.

When men like Jones are given a platform, others who harbor such twisted beliefs are given license to tout their hatred openly. We have watched the Trump presidency embolden white supremacist groups across the nation. Men like Jones need mental health care, not the ability to write laws.

For The Love Of American Values, Vote Democrat

“The Illinois Republican Party and our country have no place for Nazis like Arthur Jones. We strongly oppose his racist views and his candidacy for any public office, including the 3rd Congressional District.”

Jones poked fun at the party’s response and called this the “best opportunity in my entire political career.”

Whether Republicans will find another candidate to run hasn’t been addressed. So, Illinoisans, get out and vote Democrat. Your other option is actually a Nazi.