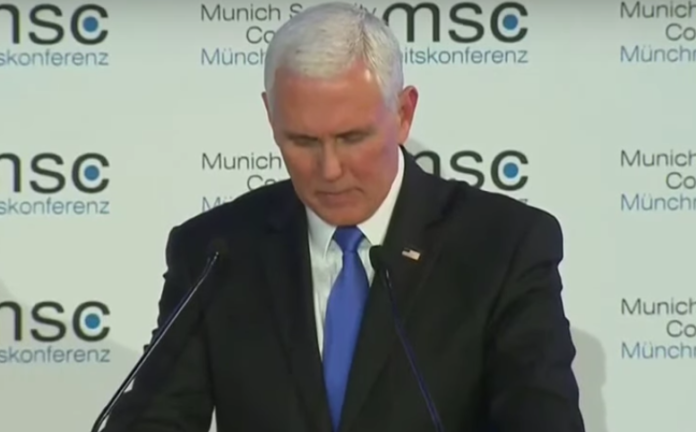 When Vice-President Mike Pence spoke at the Munich security conference over the weekend, it turned out to be an embarrassing moment for him and President Donald Trump.

Following a speech by German Chancellor Angela Merkel that drew thunderous applause for criticizing Trump for withdrawing from the Iran nuclear deal, Pence took the podium with a speech that only drew a tepid response at best.

But it was the beginning of his speech that drew the most headlines as he has paused for a moment after saying Trump’s name hoping the room would cheer, only to be met with utter silence.

“It’s an honor to be here with them and with Speaker of the House, Nancy Pelosi. Madam Speaker, my greetings to you,” Pence said as the audience applauded, clearly appreciative of House Speaker Nancy Pelosi (D-Calif.).

“We’re grateful for Senator Graham’s leadership of this delegation and grateful for the strong bipartisan American presence represented here,” Pence continued. Even Graham received applause. But then Pence mentioned Trump.

“To them and to all of you, it’s my great honor to speak to you today, on behalf of a champion of freedom and a champion of a strong national defense, the 45th President of the United States of America, President Donald Trump,” he said.

Not even a sound from a cricket as Pence paused after an obvious line meant for applause.

And we know it’s embarrassing because in the official White House transcript of the speech has the word “(Applause.)” at the end of the line.

To them and to all of you, it’s my great honor to speak to you today, on behalf of a champion of freedom and a champion of a strong national defense, the 45th President of the United States of America, President Donald Trump. (Applause.)

That is exactly how it appears in the White House transcript. But it’s not what happened as MSNBC demonstrated by playing the clip on Monday morning.

After showing the clip of Pence waiting in vain for applause for his boss that never materialized, host Hallie Jackson turned to NBC political reporter Jonathan Allen for analysis.

“Oh, my god. How hideous,” Allen began. “This is the Munich security conference and the president of the United States not getting even a clap, not even a polite golf clap, this is unheard of. It’s embarrassing for the country.”

“To the extent that other countries are looking for ways to talk to the president it appears that the only way to have a good relationship with him is like Shinzo Abe of Japan, to nominate him for a Nobel Peace Prize,” he continued. “I think this is a big problem for the United States government right now internationally that there are not a lot of longtime U.S. allies that feel good about us at all, and specifically feel good about our president in any way, shape or form, not even to give even polite applause to the vice president upon mentioning greetings from the president!”

Our government should not be basing our relationships with allies on who strokes Trump’s ego the most. It weakens our national security and turns our country into an international laughingstock. As demonstrated at the conference, our allies think Trump is a disgrace and they won’t clap for him. He has not done anything to earn their respect, but he thinks he’s entitled to it. The office of the presidency used to command respect but Trump has degraded it so much that even the office is stained and no longer holds the sway and influence it once did.