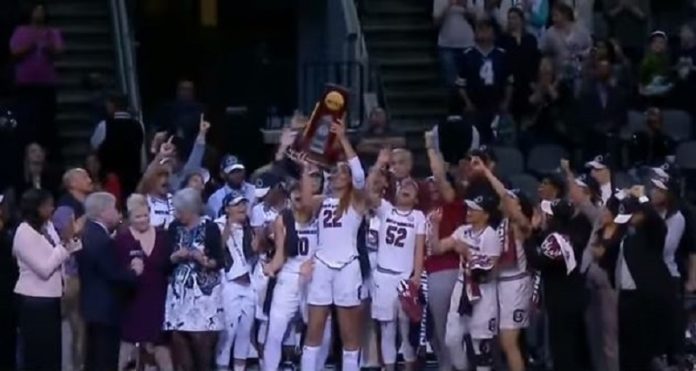 The South Carolina women’s basketball team won the NCAA championship last April. They expected to receive an invitation to the White House from President Donald Trump. In September, they still had not received an invitation. Coach Dawn Staley told The Associated Press during a phone interview:

We haven’t gotten an invitation yet and that in itself speaks volumes. We won before those other teams won their championships. I don’t know what else has to happen.

After their win, expecting an invite, Staley had stated that she and the team would accept the invitation. It’s been a tradition since 1983 for the winning team to receive an invite to celebrate their victory at the White House. That covers the terms of five different presidents.

Now, eight months later, the team is busy in a new season and can’t just drop everything on a whim to travel to Washington D.C. Coach Staley has also been selected as the Team USA coach and has been in California holding training camp for the Olympic team in addition to making sure her team does well this season at South Carolina as they work toward the 2018 NCAA Tournament.

Apparently, in Trump’s world, sports teams aren’t worth his time unless they serve a purpose for his agenda. The Golden State Warriors received an invite after winning the NBA title but Trump “rescinded” it (on Twitter, of course) when star point guard Stephen Curry “hesitated” in joining the team in Washington. So Trump invited the Stanley Cup champion Pittsburgh Penguins to the White House and made a big production out of hosting the team to rub it in the Warriors faces (they just laughed and it didn’t bother them at all).

Trump is also feuding with the National Football League over the anthem protests. When the New England Patriots won the Super Bowl, the whole team did not attend the gala event at the White House. The Clemson Tigers won their college championship and received an invitation which they accepted.

In total, 18 teams were invited to the White House for the event. Maybe Trump just decided it was easier to do all the teams and all the sports in one huge group? Coach Staley offered:

We did hear from the White House about attending (Friday’s) event, but we will not be able to attend. As I’ve been saying since our practices for this season started, all of our focus is on the season ahead. The only invitation we are thinking about is to the 2018 NCAA Tournament.

It could be that Trump’s attitude is because he really doesn’t know anything about sports, unless it involves a tiny ball, grass, and sand traps. It could be because, even after almost a year in office, Trump has failed to fill over half of the positions that are normally required to keep our country functioning at peak efficiency. Or it could be because they’re just “women” and he really isn’t fond of women unless they let him get grabby.

Whatever the reason, it appears that normal traditions are taking a backseat to the president’s golf outings. So much for always working.