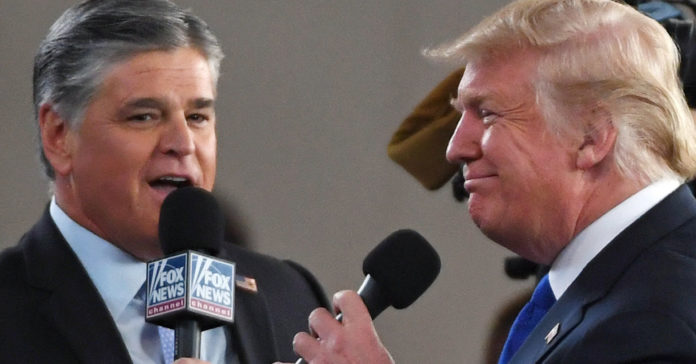 According to a new book, Fox News host Sean Hannity doesn’t just have the ear of President Donald Trump, he’s also in constant contact with key GOP members of Congress, guiding them on what they should do.

Yes, Sean Hannity and Fox are now leading the U.S. government, even though no one elected them.

The book in question is The Hill to Die On, and its authors, Jake Sherman and Anna Palmer, were guests on CNN Wednesday morning to report that Hannity is even invited to participate in Republican conference calls on policy matters. Palmer noted:

“I think that was one of the stunning things throughout the book that we detailed. Him being on conference calls, and with Republicans, with the president, around health care. You also have members of Congress leaving private meetings where they’re deciding what they’re going to do on major issues, and the first call is Sean Hannity.”

“Did they make, or did he call them?”

“Both. During the shutdown, Jim Jordan was in almost constant contact with Sean Hannity … it shows Sean Hannity’s hold over members of Congress and the president.”

“The Senate confirmed Sean Hannity, by the way.”

Though we’ve previously had reporting that Sean Hannity is indeed in close contact with the president (often speaking with him via phone after he completes his nightly show on Fox), the idea that an unelected member of the right-wing media would be helping make national policy is truly frightening. Can you imagine if MSNBC had been advising President Obama and Rachel Maddow had called him each evening after her show? Hannity would have been utterly apoplectic, insisting that Obama be impeached.

The hold Fox News has on the entire Republican Party is unprecedented and dangerous to everything this country stands for. News networks are supposed to report, not make policy. Yet another reason we need to vote Trump and his minions out of office.

Authors of a new book on Trump’s relationship with Congress detail the extent of Sean Hannity’s involvement in policy.

“During the shutdown Jim Jordan was in almost constant contact with Sean Hannity… It shows Sean Hannity’s hold on members of Congress and on the President.” pic.twitter.com/DO7GPuvyXv