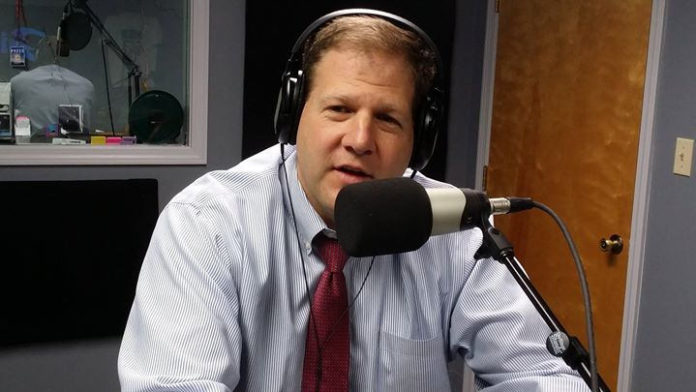 Rather than blame President Donald Trump for stealing $200 million from his state to build a wall on the southern border, New Hampshire GOP governor Chris Sununu is ridiculously blaming Congress.

Congress appropriated billions of dollars for border security in February, including $1.3 billion for 55 additional miles of border fencing. Even Republicans in Congress agreed with the appropriations or else they would have rejected the deal.

Trump, of course, expected $5.7 billion to build a wall, which would not even be effective to stop drugs and illegal immigration. It would also be a logistical and environmental nightmare.

He ended up signing the spending bill anyway. But instead of accepting that Congress has the power of the purse, Trump violated the Constitution by declaring a fake national emergency so he can steal money Congress had already appropriated to various projects, which has drawn the ire of many Republicans whose states are going to lose money earmarked for military construction and other programs.

That includes New Hampshire, which is losing $200 million meant for construction projects at the Portsmouth Naval Shipyard. The projects would have created jobs and stimulated the economy in the state, but Trump took that money.

However, Sununu isn’t blaming the burglar (Trump) for the theft. He’s blaming the bank (Congress) for not giving Trump the money he demanded.

“While we were happy to see that neither National Guard nor Military Reserve programs within New Hampshire would be affected, it was unfortunate to learn the Portsmouth Naval Shipyard may still see a reduction in their projects,” Sununu told the Concord Monitor. “At the end of the day, Congress should have done their job and secured the funding so that these projects should have never been in jeopardy.”

The problem is that Congress did secure the funding for the Portsmouth Naval Shipyard. They just did not give Trump the billions of dollars he wanted for his useless vanity project. That’s how the government works. Sometimes the president does not get everything he wants from Congress. That doesn’t mean he should be able to usurp legislative branch power and take money away from states to spend it elsewhere.

The New Hampshire Democratic Party fired back at Sununu by pointing out that he has done “absolutely nothing to protect the Portsmouth Naval Shipyard while our federal delegation has been and continues working to save the shipyard’s funding from Trump’s sham emergency declaration.”

Trump’s national emergency declaration is unconstitutional and will likely be struck down by the courts. Congress has already passed a resolution of opposition rebuking Trump. But he vetoed it, setting up an override vote that may or may not get through the Republican majority in the Senate. He also set a precedent for future Democratic presidents to declare national emergencies to deal with the healthcare crisis, gun violence, and climate change.

Make no mistake, Trump is the one Sununu should be blaming for the theft of the money Congress appropriated to his state. But he would rather blame the victim of Trump’s gross abuse of power. And New Hampshire is worse off for it.