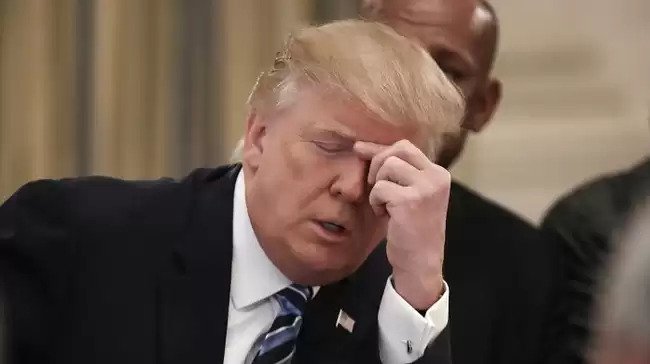 With his approval rating stuck in the low 40’s and numerous scandals threatening to overtake his entire administration, more bad news arrived for President Donald Trump Monday morning with the release of a new ABC News/Washington Post poll that shows the majority of Americans say they don’t plan to vote for Trump in 2020.

According to the ABC/Post survey, 55 percent of voters report they “definitely” won’t vote for Donald Trump in 2020 and won’t even consider casting a ballot for the incumbent president. Only 28 percent of those polled said they “definitely” will back Trump in the next election, with 14 percent saying they are willing to “consider” voting for the president.

This new poll confirms another one from January done by NPR/PBS/Marist, which found that 57 percent said there would “definitely” not support Trump in 2020, no matter what. That poll also showed that Trump’s support among Republicans had dropped seven points in the course of a month, with 83 percent of GOP voters saying they approved of the job Trump was doing.

All of this is especially troubling for the Trump re-election effort because a field of formidable candidates has amassed on the Democratic side, with former Vice President Joe Biden announcing his candidacy and immediately being shown as having an eight point lead over Trump as the 2020 race begins to take shape.

Trump is also facing legal problems on multiple fronts, ranging from the fallout of the Mueller report, his refusal to release his taxes, barring aides from testifying before Congress, and an ongoing debate over whether or not impeachment hearings should begin in the House.

Clearly, Trump is badly weakened and historically unpopular among the vast majority of the electorate. That could translate in to an electoral loss next year. A Democrat who can appeal to moderate voters in crucial states such as Florida, Michigan, Ohio, Pennsylvania, and Wisconsin might be able to steal those states from Trump and win a resounding victory over the incumbent, which hasn’t happened since George W. Bush was defeated by Bill Clinton in 1992.