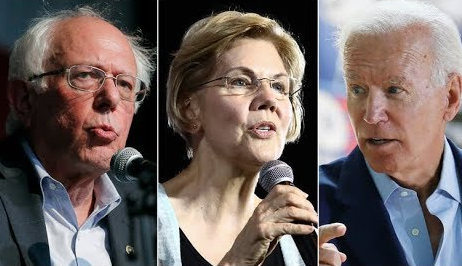 The Democratic primary race is heating up and it is no longer a runaway by former Vice-President Joe Biden as a new poll shows Senators Bernie Sanders (D-Vt.) and Elizabeth Warren have caught up to him to turn the contest into a three-way tie.

Biden has been leading the Democratic presidential field for months now by a landslide, but the latest Monmouth University poll reveals that his lead has finally slipped away and Bernie and Warren have a one-point lead over him, making the race a statistical dead-heat.

The poll finds a virtual three-way tie among Sanders (20%), Warren (20%), and Biden (19%) in the presidential nomination preferences of registered Democrats and Democratic-leaning voters across the country. Compared to Monmouth’s June poll, these results represent an increase in support for both Sanders (up from 14%) and Warren (up from 15%), and a significant drop for Biden (down from 32%).

Biden appears to be suffering losses because of his frequent gaffes on the campaign trail, and as more Democratic voters begin paying close attention, they are abandoning him for the more progressive candidates who have a stronger and clearer message.

“The main takeaway from this poll is that the Democratic race has become volatile. Liberal voters are starting to cast about for a candidate they can identify with,” Monmouth University Polling Institute director Patrick Murray said. “Moderate voters, who have been paying less attention, seem to be expressing doubts about Biden. But they are swinging more toward one of the left-leaning contenders with high name recognition rather than toward a lesser-known candidate who might be more in line with them politically.”

Murray did point out that this poll is just a snapshot, but it does seem to indicate that voters are actually paying attention and Biden will need to up his game.

“It’s important to keep in mind this is just one snapshot from one poll,” Murray said. ” But it does raise warning signs of increased churning in the Democratic nomination contest now that voters are starting to pay closer attention.”

Biden and Sanders are currently crushing Trump in most of the swing states in a recent poll. And Warren has been gaining in popularity, especially in Iowa where she has a good ground game. In fact, oddsmakers have her down as their favorite to win the nomination. Her support for Medicare for All and her down to earth communication with voters about the issues that matter to them the most have clearly made an impact.

This makes it even more important to weed-out the field so that the debate stage is not clogged with so many candidates. The three people Americans want to hear from the most are Biden, Warren, and Sanders. It’s time for many of the other candidates to start stepping aside so Democrats can rally around a candidate who can win.