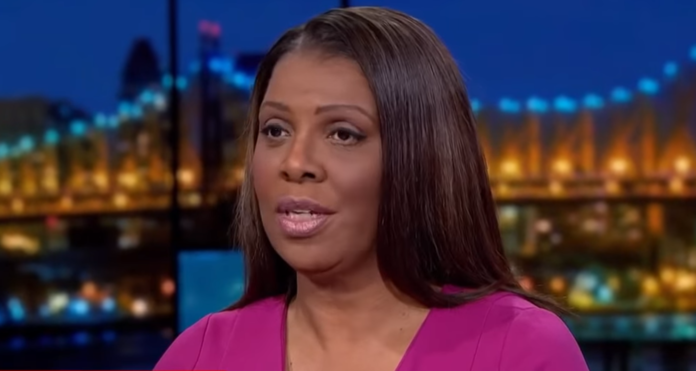 New York Attorney General Letitia James confirmed Tuesday evening on “The Rachel Maddow Show” that her office is indeed doing a deep dive investigation into the financial dealings of President Donald Trump, his children Don Jr., Eric, and Ivanka, and the Trump Organization.

Maddow set up the interview with James by noting what had transpired earlier in the day when the Trump family sued two banks to keep them from disclosing financial information to Congressional investigators:

“In addition to the breaking news we have been covering tonight that special counsel Robert Mueller gave Attorney General Bill Barr a piece of his mind for publicly misrepresenting Mueller’s findings in his report. Just in the past 24 hours, the president and his three adult children and the Trump family business all sued two banks that they’ve done business with, including Deutsche Bank, to try to block these banks from handing over Trump-related financial information in response to Congressional subpoenas.”

“This follows a week after Trump also sued his own accounting firm trying to stop them from replying to Congressional subpoenas and handing over information about Trump’s financial dealings and taxes.

“Here’s one question that arises out of that fight. If Mr. Trump and his family and his business are concerned to the point of hyperventilating in a paper bag at the prospect of anybody getting a look at their finances and taxes, why are they not also suing the New York state Attorney General? New York Attorney General Latisha James is chasing a lot of this same stuff or at least stuff along the same lines.”

Maddow’s first question for the New York AG was on point:

“You are in a unique position as the top law enforcement official in New York state, given the jurisdiction of your office and the powers of your office. We have seen Congressional committees pursue things related to taxes in the wake of Mueller’s report and the revelation that it does not seem that Mueller made that a central element of his investigation. You have been reported to also have pursued some of these lines of inquiry, particularly after Michael Cohen, the president’s longtime lawyer, suggested in sworn testimony that the president had inflated his assets for the purpose of obtaining bank loans or trying to obtain bank loans.

“Can you tell us anything about your office and its investigation along those lines?”

Though she made it clear she couldn’t go into any great detail about ongoing investigations, James did reveal that her office is taking a close look at the Trump family and the money trail:

It’s also important to note that any charges brought by James’ office cannot be dismissed with a pardon from the president. His pardon power is only for federal crimes.

The vise is tightening on the Trump family. And it may well be AG James who winds up bringing the first criminal charges against them.