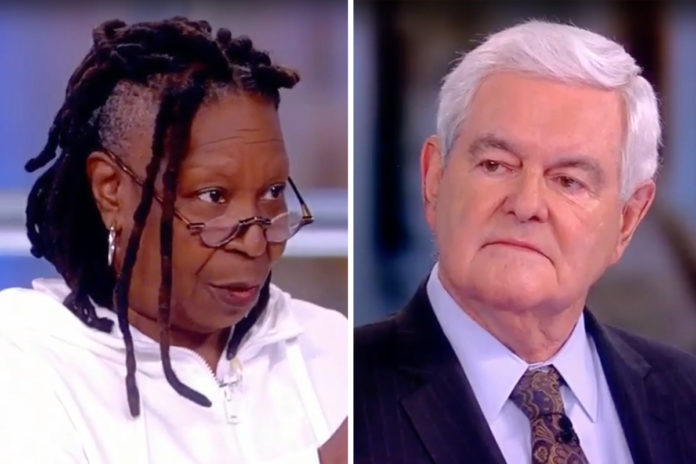 Former Speaker of the House Newt Gingrich (R-GA) got his head handed to him by the hosts of “The View” Monday when he tried to make excuses for President Donald Trump’s post-Charlottesville comments about there being “very fine people” among the white supremacists and neo-Nazis who marched.

Gingrich began with this weak defense of the president:

“It’s not. I have what he said right here. His first statement he said that ‘there was violence on many sides.’ Two days later, after all the backlash, is the first time he mentioned the KKK and neo-Nazis. And then the following day he still said, Newt, ‘you had some very bad people in that group, you also had some very fine people on both sides.’”

That led Gingrich to try a different approach:

“Are we going to say if you are somebody who thought Robert E. Lee was a decent person, which by the way would be a high percentage of white Virginians –“

“Wasn’t he a traitor to the country?”

“And a slave holder? And a horrible person?”

Clearly back on his heels, Gingrich weakly responded:

“Now you’re going to say everybody in the South who thinks that anybody was a reasonable person was, you know.”

Whoopi Goldberg lit into Gingrich with this:

“If you’re going to march with these folks, if you’re in the picture with them, it looks like you’re part of the problem. Even if you say they were good people, you have to understand that’s not what people see.

Rather than respond to Goldberg, Gingrich tried to the anti-fascist protesters had been just as bad as the neo-Nazis, but the hosts weren’t about to let that one go, with Hostin telling him:

“No one said that. What we said, Speaker Gingrich, is that he said ‘you had some very bad people in that group. You also had some very fine people on both sides.’ The suggestion somehow that he did not say that is intellectually dishonest.”

And then Goldberg finished destroying Gingrich:

“If you are marching with people wearing signs that say ‘Down with Jews, Jews are not going to take over our lives,’ and you don’t step away because that’s not how you feel, you’re going to lumped into that group.”

There can be no excuse, no rationale, and no reasoning that makes it right to side with white supremacists, neo-Nazis, anti-Semites, racists, or xenophobes. Such people are antithetical to what this country is supposed to stand for.