The United States Blues
Home News Nikki Haley praises Trump for not interfering with the Mueller investigation and... 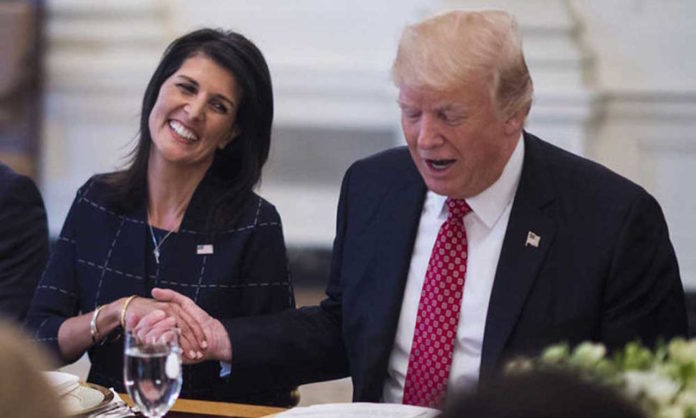 Like so many Republicans, former UN Ambassador Nikki Haley has a very short and selective memory when it comes to anything involving President Donald Trump, and that wound up getting her slammed on Twitter after the praised Trump for not interfering in the Mueller investigation.

Trump didn’t interfere in the investigation? Is that right? No, it most certainly isn’t, as the president himself admitted during an interview with Lester Holt of NBC News when he revealed why exactly he had fired former FBI Director James Comey:

“And in fact when I decided to just do it, I said to myself, I said ‘you know, this Russia thing with Trump and Russia is a made-up story, it’s an excuse by the Democrats for having lost an election that they should have won.'”

That’s not interference? It sure sounds like it is. And Twitter quickly lit up with reminders for the former UN ambassador of the many times Trump tried to derail the Mueller probe:

He confessed on camera to obstruction

Have you seen/read the report? I understood it was delivered to AG Barr; he would digest, summarize, and brief Congress. Has that happened? Is it tomorrow already? Never too early to spin though.

What if the results show that Trump should have been indicted for a few felonies but the DOJ policy saying a sitting president restrained Mueller?

Do we? Do we have to acknowledge that when his attempts to obstruct the investigation are manifold, egregious and a matter of public record?

Everyone? No interference? Gaslight much?

When we see ALL of the report. Then the public can make a decision about the results. And, no we will never be moving on. Trump has 70 yrs of corruption. Go away non relevant person…#ImpeachTrump

Congrats to Ms. Haley for proving just how irrelevant she is and why she’ll never ever be elected to national office. Well done, Nikki!