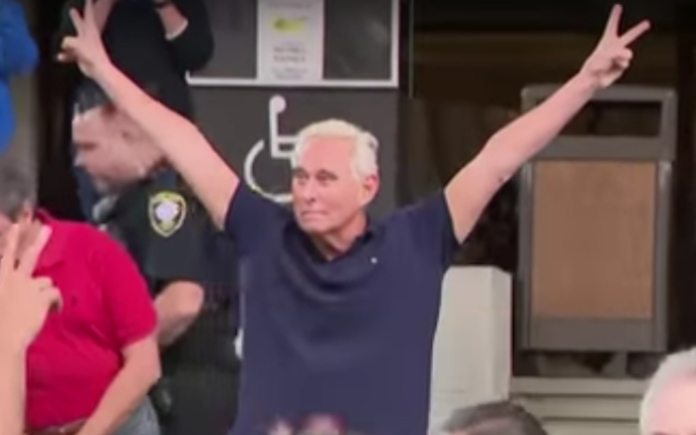 Roger Stone’s involvement in President Donald Trump’s Russia scandal is so bad that even the Nixon Foundation wants nothing to do with him, going to desperate lengths to portray him as merely a coffee boy the way Trump tried to characterize George Papadopoulos when he got busted by the FBI.

The FBI arrested Stone on Friday morning in a surprise raid after Special Counsel Robert Mueller indicted him on seven charges, including obstruction of justice, witness tampering and lying to Congress about his communications with Wikileaks, which Russia used to make Hillary Clinton’s emails public in an effort to undermine her campaign during the 2016 Election.

Upon exiting the courthouse in Florida, Stone went full Nixon by raising his arms and flashing peace signs with his hands as if to say ‘I’m not a crook.’

But the man with a Nixon tattoo on his back is so embarrassing that the Nixon Foundation tried to distance itself from him later that same day on Twitter by using a version of the “coffee boy” defense Trump and his advisers have used to distance themselves from George Papadopoulos:

Mr. Stone, during his time as a student at George Washington University, was a junior scheduler on the Nixon reelection committee. Mr. Stone was not a campaign aide or adviser. Nowhere in the Presidential Daily Diaries from 1972 to 1974 does the name “Roger Stone” appear. 2/2

Of course, the Twitterverse wasn’t buying it.

Nope. There’s video footage of them together many times. Watch “Get Me Roger Stone” pic.twitter.com/NIxU4dpGDT

Yeah, they barely knew each other. pic.twitter.com/TIguNEnd0E

It’s like the Nixon Foundation is trying to “Papadopoulos” Roger Stone…like he just got coffee for Nixon and didn’t really have anything to do with him. WOW…this really has been going on forever. Disgusting.

I should think the Nixon Foundation would be thrilled with current events, seeing how they illustrate with great clarity that Richard Milhous Nixon was only the SECOND most corrupt President in U.S. history.