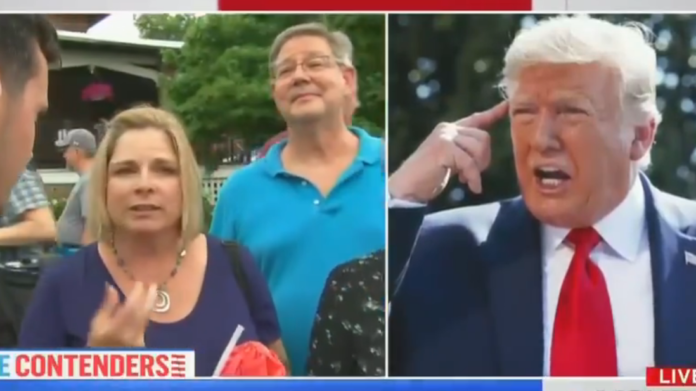 A woman who calls herself a “lifelong” conservative said Sunday at the Iowa State Fair that she’s likely to vote Democratic in the 2020 presidential election because she’s sick and tired of what she has seen from President Donald Trump since he took office:

Kate Miller told an MSNBC reporter that she had chosen Senator Kamala Harris (D-CA) in an unofficial poll taken at the fair:

That led Miller to add that she is looking closely at the Democrats in 2020:

“So I’m looking at the Democrats and I need a Democrat that is reasonable on the border. That is about people, about the rule of law. I’m an educator and we’ve got to do something about education so that’s the person that I’m looking for. It’s really hard because there are all these stump speeches and I don’t know what they believe.”

Miller’s daughter, who will be voting for the first time in the 2020 election, made it clear there’s no way she will cast a ballot for Trump, remarking:

“I can’t vote for Donald Trump and if there was a better conservative, I would probably vote for them. But he says so many things that are just absolutely disgusting and tweeting foreign policy is not presidential enough. I really want a Democratic candidate that I can get behind and support and like my mom said, isn’t completely crazy on immigration and really will make things like schools safer that I can have a place here in my future and just make the country better.”

Kamala Harris is also her choice, she noted, just like her mother:

“Kamala Harris like my mom, but if any of them change their policies so far, I know a lot of my friends like Warren and Sanders, but they’re a little too far left for me.”

Just the fact that some loyal Republicans are considering voting for a senator from California is incredible. And it suggests that Donald Trump’s reelection — even in normally safe red states — is far from certain.

This clip of a conservative mother and daughter explaining why they can’t vote for Trump in Iowa should have Republicans scared. pic.twitter.com/Ip0L5syyt8