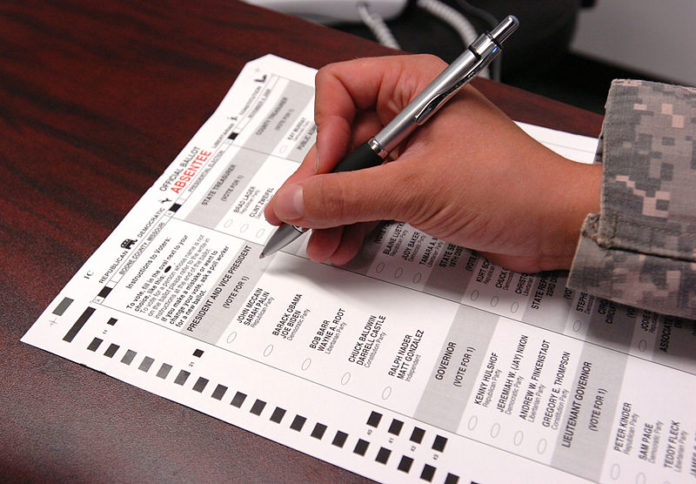 Republicans have repeatedly accused Democrats of election and voter fraud, but a North Carolina Republican candidate is actually being investigated for committing it to win his House race last month.

The 9th District in North Carolina seemed to have elected GOP candidate Mark Harris over his Democratic opponent Dan McCready on November 6th. But the State Board of Elections and Ethics Reform refused to certify the results this week after voting irregularities were discovered in Bladen County, where numerous residents have filed affidavits claiming that their votes were tampered with or destroyed by people posing as ballot collectors.

According to the Charlotte Observer:

Bladen County had the highest percentage of absentee ballot requests in the state. There, 7.5 percent of registered voters requested absentee ballots. In most counties it was less than 3 percent.

In seven of the eight counties in the 9th District, for example, McCready won a lopsided majority of the mailed-in absentee ballots. But not in Bladen County. There, Republican Mark Harris won 61 percent even though registered Republicans accounted for only 19 percent of the county’s accepted absentee ballots.

“But to have each and every one of those unaffiliated voters vote Republican, that’s pretty astonishing,” he added. “If that’s the case, there’s a very concerted effort to use that method to one candidate’s advantage. . . . But at that level there’s something else beyond a concerted effort that could be at work.”

Harris’s campaign allegedly sent campaign workers door to door to collect absentee ballots, destroying those that did not help their candidate or filling them in themselves to make sure that vote would count for Harris.

If proven, the allegations would call into question other races won by Republicans, especially in states such as Florida and Georgia, where similar accusations of voter suppression and election fraud have been leveled against Republicans. It could also lead to Democrats capturing yet another House seat as part of the blue wave.

Yes, election fraud is a problem. But it’s being practiced by Republicans, via racist gerrymandering, vote suppression and more direct means—like the incredible shenanigans being revealed in the #NC09 congress race @McCreadyForNC lost by 905 votes. Read.https://t.co/KYxvkOUUOy

#NC09 GOP candidate @MarkHarrisNC9’s campaign appears to have sent people door to door in rural Robeson & Bladen Counties to steal absentee ballots from elderly black voters and complete them for Harris. There were 1300+ such ballots in those counties in a race Harris won by 905. pic.twitter.com/ufJ5vP3TZ2

There are also allegations that large numbers of absentee vote by mail ballots—which traditionally lean Democratic even in Red/Purple states—may have been collected by Republican operatives and simply disposed of. See this from NC political scientist Dr. Michael Bitzer: pic.twitter.com/XgycYp4Y4F

The GOP operative at the center of the #NC09 scandal is Leslie McRae Dowless, who has a long history of voting hijinks in the region and led an “80 person team” working for @MarkHarrisNC9, per sworn affidavits, with a promise of $40K bonus if Harris won. https://t.co/KxFXsm9g4I

The amazing thing is that this may well lead not just to new elections for Congress but maybe even a new Republican primary, since Dowless also worked on that race, which Harris won over the #NC09 GOP incumbent Robert Pittenger, also due to suspicious absentee ballots. pic.twitter.com/CtKunkCuCk

The bottom line is that “NC” stands for “NOT CERTIFIED,” and if there’s any justice whatsoever the results—which elected Harris, a fundamentalist pastor who directs women to “submit to their husbands” to Congress—should be tossed out and folks should go to jail. #NC09

(And man, if Republicans could get away with this BS in North Carolina #NC09 through grassroots corruption and fraud, imagine what neighboring GA’s newly “elected” governor Brian Kemp could’ve gotten away with while serving as elections supervisor OF HIS OWN ELECTION.)

It sounds like Harris stole this election from his Republican primary opponent and his Democratic general election opponent using a dirty strategy to confuse and pressure absentee voters, many of whom are elderly, into handing over their ballots so he could rig the race.

Of course, Republicans are not going to cry foul about the alleged election fraud they themselves are committing. President Donald Trump will especially ignore it because he would rather falsely accuse Democrats of election fraud instead of admitting that a member of his own party could be guilty of actually committing it.