The United States Blues
Home News North Korea looks to suspend talks with the US as Trump’s negotiating... 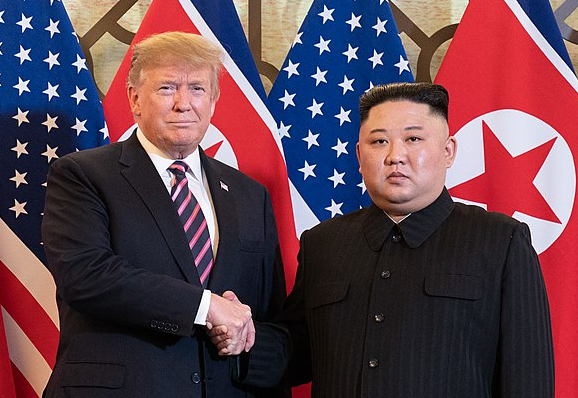 North Korea appears to be ready to resume rocket launches and nuclear testing according to the authoritarian nation’s vice foreign minister this week.

President Donald Trump failed to secure a denuclearization deal in Vietnam last month after North Korean dictator Kim Jong Un demanded concessions such as sanctions relief as a pre-condition to him giving up nuclear weapons.

In fact, the summit failed so badly that a signing ceremony planned by the White House had to be canceled and Trump came home with his tail tucked between his legs as his National Security Adviser John Bolton and Secretary of State Mike Pompeo continue to insist that talks with North Korea are still going just fine.

And Pompeo is sticking to his claim even after new statements from a high-ranking North Korea official makes it clear that North Korea has no intention to give up their nukes and may suspend talks altogether.

“We have no intention to yield to the U.S. demands (at the Hanoi summit) in any form, nor are we willing to engage in negotiations of this kind,” TASS quoted Choe as telling reporters in the North Korean capital.

Choe said Pompeo and national security adviser John Bolton “created the atmosphere of hostility and mistrust and, therefore, obstructed the constructive effort for negotiations between the supreme leaders of North Korea and the United States”, TASS quoted Choe as saying.

Choe also referred to the United States as “gangster-like” which will particularly sting Trump since he is associated with mobsters and has a mob mentality.

“I want to make it clear that the gangster-like stand of the U.S. will eventually put the situation in danger,” Choe said before going on to claim that “personal relations between the two supreme leaders are still good and the chemistry is mysteriously wonderful.”

Pompeo brushed off the statement by saying that he trusts Kim Jong Un will keep his word that he won’t resume nuclear and missile tests.

“We have every expectation he will live up to that commitment,” Pompeo said.

But North Korea experts say that Choe’s remarks are an ultimatum to the United States to give Kim Jong Un the concessions he wants or else.

“It is likely to gauge the U.S. reaction in the days ahead before making a decision to launch a rocket,” he said.

And if North Korea launches a rocket, it will be the ultimate Trump failure because he has repeatedly bragged about Kim Jong Un’s ceasing of missile activities and nuclear tests as indicators that North Korea is no longer a nuclear threat. Clearly, he has been duped.