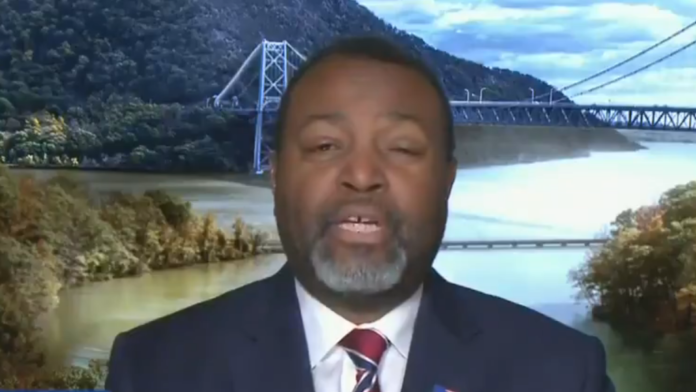 Malcolm Nance is a noted expert on security and counter-terrorism, and he warned Saturday on “AM Joy” that President Donald Trump’s hostile rhetoric in his speeches and and Twitter are inspiring right-wing domestic terrorists to plan and carry out horrific acts of mass murder.

Referring to the arrest this week of Coast Guard lieutenant Christopher Paul Hasson, who was caught with dozens of semi-automatic weapons and at least a thousand rounds of ammunition he planned to use to attack Democratic members of Congress and media figures, Nance commented:

“This guy believed that he was going to go out and carry out a run and gun attack where he was going to kill the liberal leadership of the United States. Granted it might have been a fantasy in his head. The probability of him getting away with that, well it’s not good, but it’s not zero and that’s where the problem lies.”

Nance then went on to explain the larger problem that exists in the country at this time:

“He had an ideology in his head that is based on the hatred that we are hearing every day in the United States. And it’s not the first attack. We had the pipe bomber a few months ago try to do the same thing only in a more crude fashion. This was a very, very dangerous circumstance that we have to be on guard for all of the time.”

Indeed, there’s been a dramatic spike in hate crimes since Trump took office, and the president himself posted this on Twitter Wednesday:

The New York Times reporting is false. They are a true ENEMY OF THE PEOPLE!

To Trump, anyone who disagrees with him or dares to report information he doesn’t like is the enemy and should be destroyed. He’s even been known to point to the media at his rallies and call them dishonest or evil. This kind of language — especially when it comes from the president — has the power to incite violence and terror. And yet Trump continues to traffic in such angry rhetoric.

Though he’d never admit it, Trump knows exactly what he’s doing when he says such caustic things. He simply doesn’t give a damn that he’s contributing to the increase in politically-motivated violence we see all around us.

.@MalcolmNance says the “hatred that we are hearing every day” in the Trump era is emboldening right-wing terrorists. #ctl #p2 #amjoy pic.twitter.com/aLtuVPMjYI