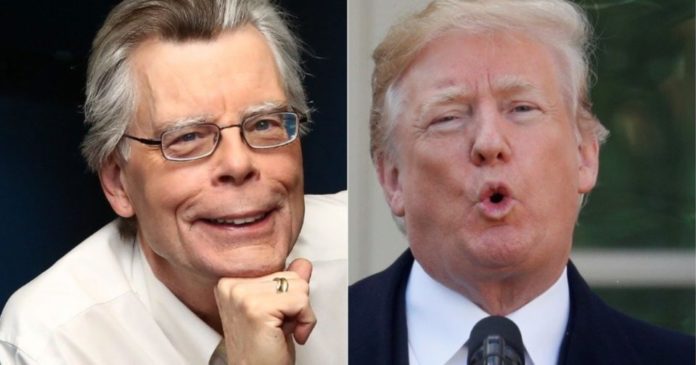 Ever since Donald Trump was elected president, novelist Stephen King has been firing off perfectly worded tweets in Trump’s direction, calling attention to the president’s extreme vanity, lack of common sense, and overall unfitness for office.

And now, with the federal government shutdown until at least December 27 thanks to Trump’s childish demand that Congress give him billions of dollars to construct his wall on the Southern border, King is again giving Trump a social media slap down by comparing him to an episode of the classic TV series “The Twilight Zone.” Take a look:

Trump increasingly reminds me of Anthony Freemont, the monster child in a Twilight Zone episode called “It’s a Good Life.” Republicans kowtow to him, because he might throw a tantrum and send them away into the cornfield if they don’t.

Earlier in the day, King had mocked Trump for the falling stock market, which closed at its lowest level in ten years on Friday:

Trump was eager to take credit for the stock market’s rise. Who will he blame now that it’s shitting the bed? THE DEMOCRATS!

These two tweets come after one King sent out last week when Trump was again demanding his wall be built:

Fuck your wall. Split that 5 billion between at-risk children who don’t have lunches and vets who can’t get proper medical and psychological treatment. Fuck your vanity project. Do something good for once.

You have to give King credit. Trump does act like a child and only cares about himself. When he isn’t patting himself on the back so much he threatens to dislocate his shoulder, this president is making moronic statements and trying to pretend he knows what he’s doing.

Donald Trump is indeed a nightmare, a monster child, and a egotistical jackass. And he’s even scarier than “The Twilight Zone.”