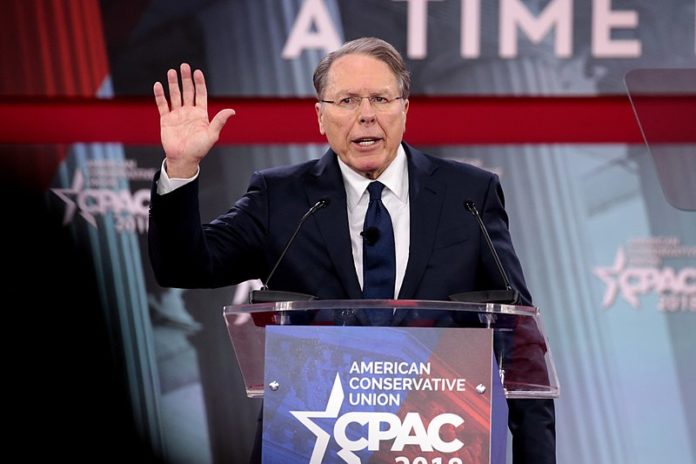 America’s gun culture is now so frightening that even National Rifle Association (NRA) CEO Wayne LaPierre is scared of it even as he continues to perpetuate it.

For years, LaPierre had made it his mission to push a “guns everywhere” agenda, insisting that the only way to make our country safe from gun violence is for more people to own guns and carry them around like a security blanket.

The problem is that it’s getting more difficult to tell who is a threat or not and it’s so easy to buy a gun that virtually anyone could walk into a gun store right now and purchase a killing machine, even someone who should not have one.

It should also be pointed out that America already had the most guns per capita in the world before LaPierre urged an increase of guns in our society. The number of mass shootings in the rest of the world is virtually non-existent, while the number is only increasing here in our own country. Clearly, the problem is the guns and our weak gun laws.

Even LaPierre knows this, which is why he demanded the NRA purchase a home in a gated community in Texas for him so he could feel more secure and safe from gun violence.

Wayne LaPierre, the longtime head of the NRA, told associates he was worried about being targeted and needed a more secure place to live after 17 people were gunned down at Marjory Stoneman Douglas High School in Parkland, Fla., the people said.

LaPierre and his wife, Susan, were intensely involved in the selection of the property, rejecting an upscale high rise in Dallas with numerous security features in favor of a 10,000-square-foot estate with lakefront and golf course views in Westlake, Tex., on the market for about $6 million, according to emails and text messages.

There have been several more mass shootings since Parkland, including the El Paso mass shooting last weekend.

As LaPierre continued to claim that owning guns is the only way to gain security, he sought to secure his own safety by demanding a home in one of the very gated communities the NRA has mocked as a liberal safe space. This did not go unnoticed by journalist Dana Milbank, who mocked the NRA stalwart in a recent column for the Washington Post.

“After two horrific mass shootings, we come together as a nation to confront an urgent question: How are we going to keep Wayne LaPierre safe?” Milbank began. “The longtime head of the National Rifle Association, it turns out, is worried sick about his personal safety in this gun culture.”

“Some will see hypocrisy in LaPierre trying to get the NRA to buy him a mansion in a gated community when the NRA, at the time of the attempted acquisition, issued a statement decrying the anti-gun ‘elites’ who ‘live in gated communities,’” he continued. “Many will see it as ironic that LaPierre feels unsafe because of the very gun culture his policies have created. But it’s good to know he apparently feels some of what most Americans feel: that gun violence is out of control.”

Milbank then shared that his own daughter is frightened to be among crowds because a man carrying a BB gun caused a stampede of people trying to flee for their lives.

“My 15-year-old daughter was caught up in one such panic in June,” he explained. “At the Capital Pride Parade in Dupont Circle, a man with a BB gun set off a stampede of hundreds of people, and falling metal barriers may have convinced others that shots had been fired. Several were injured. My daughter, separated from her group, sheltered in a hotel basement until police gave the all-clear. She has been skittish about being in crowds since then, and understandably so. Since El Paso and Dayton, and Gilroy and Virginia Beach and Pittsburgh, millions don’t feel safe shopping, attending festivals, going to school or houses of worship, walking the streets or going out at night.”

Indeed, people can’t go anywhere or do anything these days without having to worry about being shot. Kids have to have bulletproof backpacks now and everyone needs to have an escape strategy everywhere they go. We now live in a fearful and paranoid society where trust is more fragile than ever before.

And it’s good to know that LaPierre himself is now just as fearful and paranoid.

“This is directly because of the madness LaPierre’s NRA has inflicted on America,” Milbank concluded. “Now he knows what it feels like.”

Still, LaPierre and the NRA have not budged, recently warning Trump not to expand background checks in the wake of two mass shootings.

Eventually, the violence will come to gated communities. Because as much as LaPierre thinks they are safe, he has created a culture of gun violence that is affecting everyone. And you can bet that it won’t be long before he experiences it personally. And it will only be then that he changes his mind, because conservatives don’t care until it happens to them.