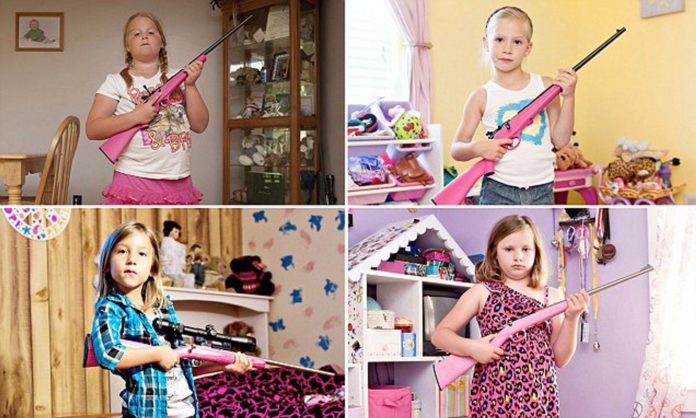 The NRA’s top lobbyist for the state of Florida is arguing against a ban on assault weapons in the United States because she says that if such a law passes, little girls will no longer be able to get rifles for their birthdays.

According to the Tampa Bay Times, Marion Hammer said Friday at a meeting of economists:

“How do you tell a 10-year-old little girl who got a Ruger 10/22 with a pink stock for her birthday that her rifle is an assault weapon and she has to turn it over to government or be arrested for felony possession?”

Uh, how about you don’t buy a 10-year-old a high-powered rifle in the first place?

Florida will vote in a 2020 statewide referendum to decide if assault weapons will be banned in the Sunshine State. Recent polling shows that 59 percent of registered voters support such a ban.

Hammer’s ridiculous assertion is also undercut by what Ruger itself has to say about the 10/22:

“It was designed as a quality rimfire gun for adults.”

A 10-year-old is NOT an adult and should NOT have such a weapon. A BB or pellet gun, perhaps, but not not a rifle as powerful as the 10/22.

Kids with guns has led to numerous tragedies over the years. In 2014, a 9-year-old girl firing off an Uzi submachine gun at a gun range accidentally shot and killed an instructor, as NBC reported:

“Charles Vacca, 39, was teaching the girl how to use the automatic weapon on Monday morning at the Last Stop outdoor shooting range in White Hills, Arizona, when she pulled the trigger and the kickback caused the gun to lurch over her head, investigators said.”

The Florida assault weapons ban is being led by a grassroots group that has already managed to get 100,000 signatures on a petition that would place the issue on the ballot next year.