The United States Blues
Home National News NRA members say the group needs to distance itself from Trump before... 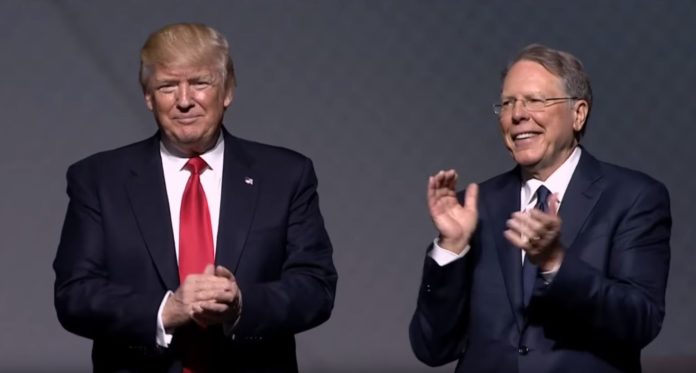 At their annual convention, which is being held this year in Indianapolis, many members of the National Rifle Association (NRA) have a message for the group’s leadership: Stay clear of President Donald Trump and focus instead on Second Amendment rights.

Several members who spoke with a reporter from The Daily Beast said the NRA is already caught up in a major fundraising scandal connected to the donations the gun rights group gave to the Trump campaign. And yet NRA brass is only tying itself more closely to the embattled Trump administration:

“There was Kentucky Gov. Matt Bevin, talking about the fight to uphold ‘Judeo-Christian values.’ There was (Mike) Pence, who talked about the Green New Deal. There was Sen. Ted Cruz (R-TX), comparing the Democratic primary to a Saturday Night Live sketch, mocking former Vice President Joe Biden (‘Joe will be offering backrubs for anyone that would like it,’ he said). And of course there was Trump, whose biggest applause line came when he talked about ‘building the wall’ and the 400 miles that would supposedly be built ‘by the end of next year.'”

All of that rang hollow to the ears of Allan Scott, who drove to the Lucas Oil Center for completely different reasons:

“Didn’t really catch too much of what they were saying.

“Stay away from other political issues and stick to guns, and I think you’ll get more people in. Keep your mouth shut about the wall.”

“We need to get back to defending the Second Amendment.”

Cody Becker said he’s canceled his annual membership dues because he’s convinced the NRA is about to self-destruct:

“I lost on any faith that any dollars they receive go to anything that matters. They lost their way—period. They’re f*cked.”

And the irony is that the NRA may on the verge of collapse because they dared to align themselves with a man who destroys everything he touches. Donald Trump is a failure. He’s a failure in business, in marriage, as a father, and as president. And yet the NRA thought it would be wise to get in bed with this miserable failure of a man. Sounds like they’re almost as clueless as Trump himself.