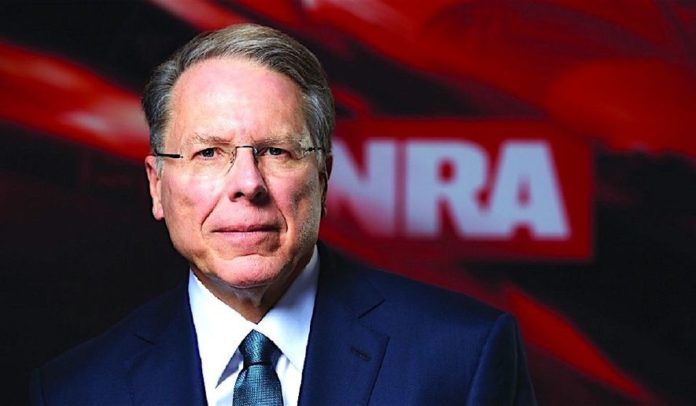 The National Rifle Association (NRA) — which has long served as a conduit for money from the gun manufacturing lobby to Republican politicians across the country — is now the verge of losing its tax-exempt status, which would likely be the death of the group.

A new collaborative report by The Trace and The New Yorker reveals that hundreds of millions of dollars have allegedly been siphoned off to top executives and vendors at the National Rifle Association (NRA).

Most of the blame for why the NRA is currently running a $40 million annual deficit can be placed on Ackerman McQueen, a public-relations firm based in Oklahoma:

“For more than three decades, Ackerman has shaped the NRA’s public identity, helping to build it from a niche activist organization into a ubiquitous presence in American popular culture. Ackerman produces the NRA magazine America’s 1st Freedom and has devised its most successful ad campaigns, including one called “I’m the NRA,” for which it recruited gun owners, including the actor Tom Selleck and the basketball star Karl Malone, to pose with their weapons.”

The connections between the NRA and Ackerman go deep, and that’s where the larger problem lies for the gun lobby:

“Top officials and staff move freely between the two organizations; Oliver North, the former Iran-Contra operative, who now serves as the NRA’s president, is paid roughly $1 million a year through Ackerman, according to two NRA sources. But this relationship, which in many ways has built the contemporary NRA, seems also to be largely responsible for the NRA’s dire financial state. According to interviews and to documents that I obtained — federal tax forms, charity records, contracts, corporate filings, and internal communications — a small group of NRA executives, contractors, and vendors has extracted hundreds of millions of dollars from the nonprofit’s budget, through gratuitous payments, sweetheart deals, and opaque financial arrangements.”

According to Salon, that’s where the NRA’s tax-exempt status comes into question:

“Reportedly, some of the NRA’s payments that may constitute a conflict of interest pass through financial channels that intentionally obscure the recipients.

Gun control activist Shannon Watts of Moms Demand Action said Thursday she has notified the IRS that they need to take a closer look at the NRA:

BREAKING: Based on this new article, @Everytown – the parent org of @MomsDemand – just filed a complaint about the @NRA’s tax-exempt status with the IRS, and is calling for federal and state investigations into the NRA’s operation as a charity. https://t.co/x2aFgHKl3J

Imagine if the NRA loses their tax-exempt status while Donald Trump is president. That alone would be the sweetest karma of all.