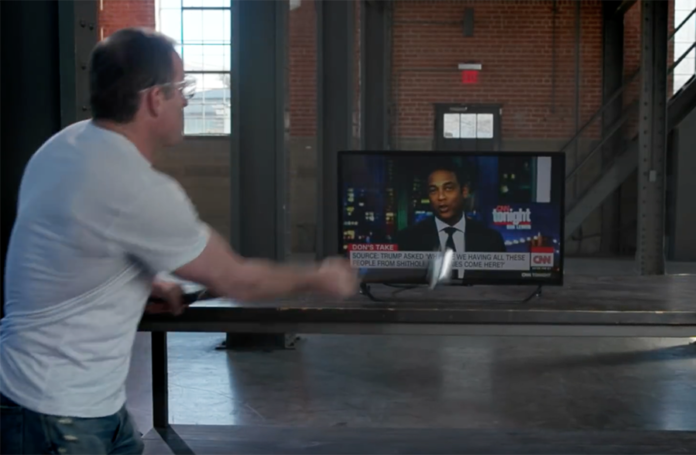 The National Rifle Association published a controversial new ad on Youtube this week. It’s needlessly violent and doesn’t present much of a message. Here’s a summary.

A man wearing a t-shirt printed with a blue teardrop with the saying, “Socialist Tear,” holds a sledgehammer in front of a television. The man is white, which is exactly what the nation learned to expect from the NRA.

The television behind him plays clips from various TV shows and media criticizing President Donald Trump and the NRA. As the sound builds, the man becomes angrier, until he reaches a breaking point and smashes the TV, knocking it to the ground.

The NRA, so concerned with socialist “snowflakes,” apparently can’t handle when the media doesn’t show enough respect for the president. The NRA also can’t handle logical deconstructions of the founding principals of an organization that it could be argued is responsible for the inability of state and federal governments to prevent incredible frequency at which mass shootings occur in the United States.

And so, the NRA snowflake decides to smash the television. And what is the message here, really? Smash dissent? Does the NRA wish to promote violence against those who seek to highlight propaganda?

The public isn’t quite sure. And the fiery responses to the ad from Twitter users across the country are probably not what the organization was hoping for.

Some of the gems include:

“National sledgehammer organization: At least be consistent to your message and use a shotgun ffs!” – @RoguePaddington

Note: according to Huffington Post, the man in the video is right-wing radio host Greg Stinchfield, who is known for some misguided comments last year involving a suggestion that North Korea should drop a bomb on Sacramento, California.

Only the best from the NRA!

So a branded #NRATV channel with total content control from the @NRA is the real truth over real journalists and media … and apparently I need to smash my TV to get this channel? 🤔 #CantFixStupid

#NRATV Ad so ridiculous I thought it was a parody. Cannot believe the astounding stupidity of message. Smash ideas you don't agree with? Check. Resort to violence rather than peaceful discourse? Check. Dogwhistle to alt-right? Check. NRA attracting the best and brightest! https://t.co/hvVbNhlPXY

Uh-oh. The #NRA wants us to stop saying mean things about Liddle Donnie. And if we don't, they'll smash their own TVs. I wonder if they've thought this through…. #NRATV #IllSayWhatIWanthttps://t.co/16AdG8Qpdl

Look up overcompensation in the dictionary. Your picture is there #nratv

Absolutely! Let’s have all @nationalrifle #NRA supporters smash their televisions so they can’t see their own ads! #Idiots #NRATV
The stupidity of the #NRA and its members is breathtaking